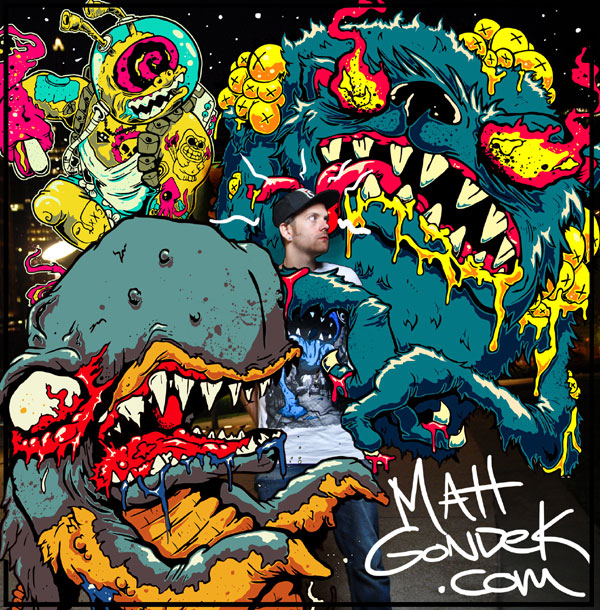 Artist Matt Gondek is a happy person living in a world of monsters. The Pittsburgh-based designer’s portfolio is home to hundreds of savage beasts with blood, pus and unidentifiable gunk dripping from their claws and jaws.

Over the past four years, Gondek created a legion of monsters to grace t-shirts for bands such as The Devil Wears Prada, Set Your Goals, From First to Last, Blood On the Dance Floor, Asking Alexandria, Haste The Day, Chiodos and Oh Sleeper – just to name a few. His designs are loud, colorful and carry a disturbing undertone reminiscent of hot rod monsters from years gone by. Gondek’s most recent project – a line of t-shirts for Fangoria magazine – is a prime example of his dark yet cartoonish view of the world. 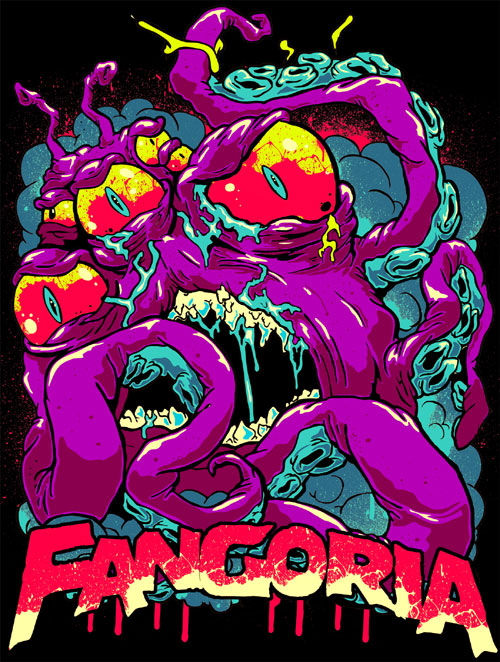 “They wanted some monsters in my style because [Fangoria] wanted something less gory than they’re normally into – because they’re really into gross stuff,” says Gondek, a heavily inked 27-year-old.

Gondek began designing for Fangoria thanks to his connections with Brothers Entertainment – a management company for a variety of bands (comparable to the Agency Group with whom he also does design work). He said his projects have become increasingly channeled through such companies in recent years. The Fangoria shirts, which are set to release next month, are a prime example of his leap from DIY into a larger market.

“They’re trying to put them in Spencer’s – I think – but I know they’re going to be on their Web site. I’m getting interviewed by [Fangoria] too,” he says without showing any signs of boastfulness.
Gondek says earlier that day he had been working on another Brothers’ project. The design was for a band called Mary Magdalan, which he describes as a being fronted by a woman who looks like Marylyn Manson.

“They send me her MySpace link – so I’m checking out photos of her because one of the designs I have to do is a caricature of her. She’s just all tore up with blood and chains – it’s pretty gross,” Gondek says. “So that’s what I did today – I drew this woman cutting the heads off teddy bears.”

Although gore is a big part of Gondek’s art, he also co-owns a clothing brand called Wonderful Life that tends to feature friendlier designs such as school lunch juice boxes and cutesy creatures. 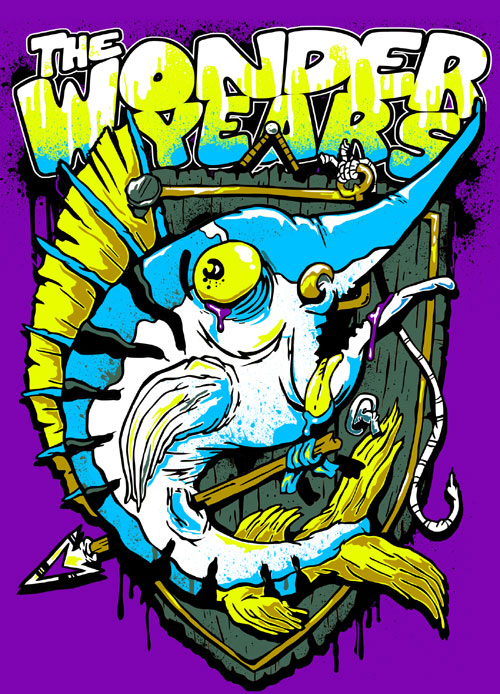 “For me personally – a lot of people who do what I do who have clothing lines it’s all like zombie-kill- horror-everything,” Gondek says. “I kind of wanted to do that exact opposite of that – I like that stuff – but that’s not really me.”

Gondek started Wonderful Life with musician Brian Nagan from the Minneapolis- based band Four Letter Lie. He said that Nagan was the first client to keep in close contact with him after completing a project.

“Brian was the first guy I met that actually called me just to say ‘hi’ – just to run ideas by me for other things he’s doing –a really nice guy,” he says.

Nagan came up with the name, but it was Gondek who put the face to brand with his bold, attention grabbing designs.

“He started Wonderful Life, but he didn’t have anything. He just wanted to do it,” Gondek says. “We started messing around with it last September and finally got it to fruition when we actually have actual shirts and a Web site in February.”

Gondek and Nagan recently released a new shirt called “When the Earth Comes to Collect,” which features a bright blue monster stomping its way down a black and white photo of a street in London.

Gondek said that the name of the shirt came from his best friend’s band who released an album with the same name – while the design itself just came about at random.

“So I’m just kind of making fun of them,” he says while sporting a smirk. “But the monster – that’s just because of what I do – it just flew out of my hand one day when I was trying to think of a new shirt design.” 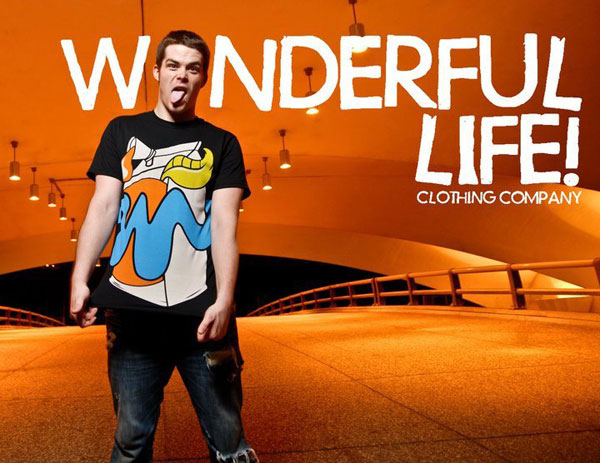 Gondek’s art comes naturally to him – his drawing pencil is a vehicle for his unique vision of the world around him. He attributes his knack of creating monsters from his childhood past time of reading comic books.

“There was this comic book by this guy named Rob Schrab – it was called Scud: The Disposable Assassin,” he says, giving away a hint of childish excitement. “Basically, he was this robot who would go out and kill all kinds of weird shit. All the monsters in it were just completely off the wall.”

Gondek honed his craft by drawing the monsters from Scud over and over with robotic resolve. He says now when he shows people the comics they can definitely see the similarities.

Gondek also draws influence from visual artists outside the comic book world such as illustrator Joshua Andrew Belanger, designer Derek Guidry, 80s skateboard-style guru Benjamin Lande, metal master and Juxtapoz magazine heavyweight Skinner, and Alex Pardee – who designed album artwork for The Used. An Australian artist by the name of Jeremyville is who Gondek cites as the primary muse for his more cartoony pieces. 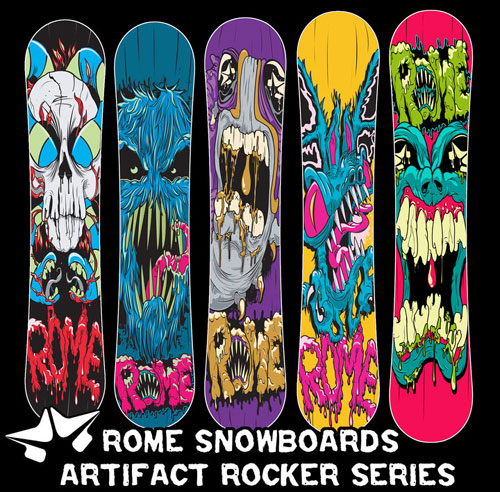 “He basically just draws these little characters on everything he’s hired to do – he just puts a lot of these happy little guys on it,” he says. “I guess – I don’t know if I stole some of the ideas off of him, but I think about it a lot when I’m drawing.”

Gondek recently channeled his mentors while creating the graphics for Rome snowboards. His flashy monsters can be found slithering across five boards for a line called the Artifact Rocker series. He says that the project was great because Rome allowed him to have artistic control over the designs.

“Put monsters on these boards – do what you do,” he says in regard to Rome’s instructions for the artwork.

The only problem was that he had never done work for a snowboard company before.

“I had to think about how to make something fit into those proportions, but other than that it was awesome,” Gondek says.

When asked about working for skateboard companies – his face turns to surprise as he explains that he has only been given the opportunity to work with one. Gondek designed three decks for a Swedish company called Shit.

“They literally have stores there called Shit,” he says, bearing grin to match the subject. 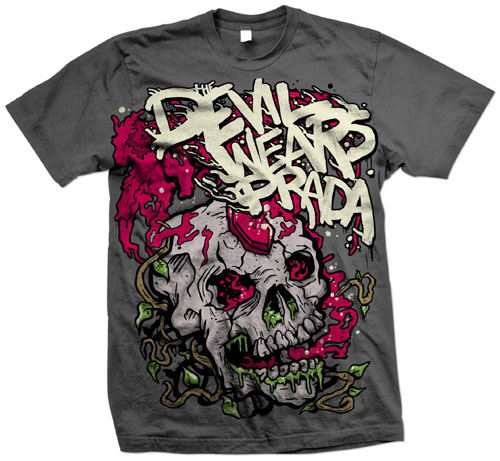 Apparently, the word “shit” doesn’t translate as a swear word in Swedish culture. It’s the equivalent of how American’s use the word “poop” as a non-offensive piece of everyday diction.

“It’s like how we know the word ‘shag’ here means to fuck, but it’s OK to say,” Gondek explains. “Where in England you can’t have Austin Powers: The Spy Who Shagged Me because it’s literally saying ‘The Spy Who Fucked Me.’”

From designing for Shit skateboards to surviving shitty jobs – Gondek has worked at both ends of the career spectrum. While in college at Pittsburgh Technical Institute (the same school that produced Internet sensation iJustine), he worked at a variety of terrible gigs including a deli job at Costco’s that he describes as horrifying.

“My job was to open up the boxes and grab the chickens and put them on these big six-foot-long spikes and put them in the [rotisserie] oven,” he says. “I did that for three hours every day.”

Gondek’s girlfriend laughs as he tells the story. His demeanor shows that he’s comfortably moved on from this phase in his life, but he may be keeping such thoughts around to remind him to keep his spurs planted firmly into the sides of his career. 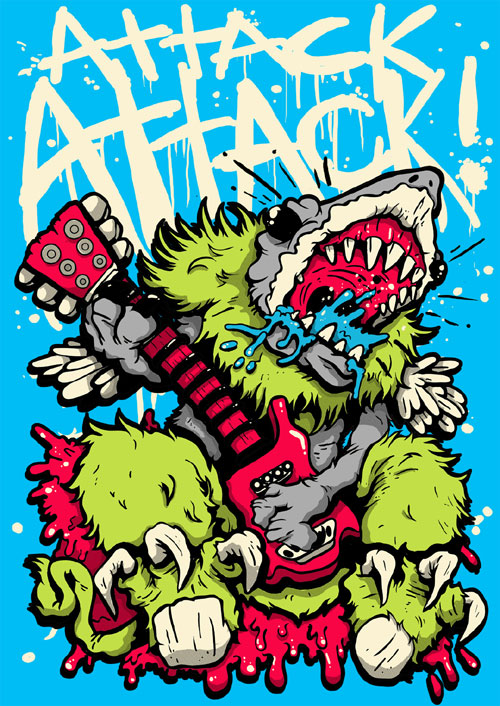 “It’s nice that I get to wake up every day, walk twenty feet, sit down, do the thing I love most in my life and make money off it,” he says. “The trade-off is that I don’t have healthcare. I don’t have a 401K – all the good stuff that comes with having an actual job.”

Gondek doesn’t let this get him down even as he shares the story of getting a tooth pulled after refusing to go under because it would cost more. He’s weighed the risks and his art has shown that it’s usually a winning gamble.

“To me – the trade-off is worth it,” he says. “My health insurance is I wake up every day and I’m happy. If I die tomorrow at least I was happy while I was here.”

Healthcare isn’t the only problem to plague freelance artists like Gondek. He also has nightmare clients to contend with – including a Jamaican rapper who attempted to convert him to Christianity during an unwanted two hour conversation at three in the morning.

Gondek’s current clients and fellow collaborators haven’t presented him with issues lately. He says he enjoys working with his friends on projects right now including a series of images with Rob Larson, a photographer and silkscreen-Jedi, who recently completed work for Anti-Flag. The project features Pittsburgh landmarks surrounded by giant monsters.

“All the stuff people recognize with a big stupid monster of mine on top,” he says.

While these monsters may seem stupid to some – they’ve lead Gondek to a blossoming freelancer career and the start of a Wonderful Life.

See more of Gondek’s artwork at www.mattgondek.com and get updates on his clothing line at http://www.facebook.com/wonderfullifeclothing. 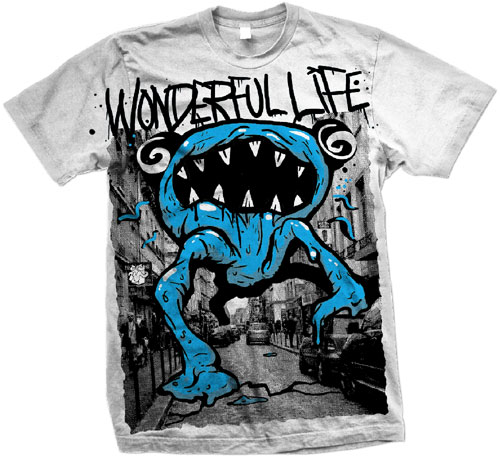 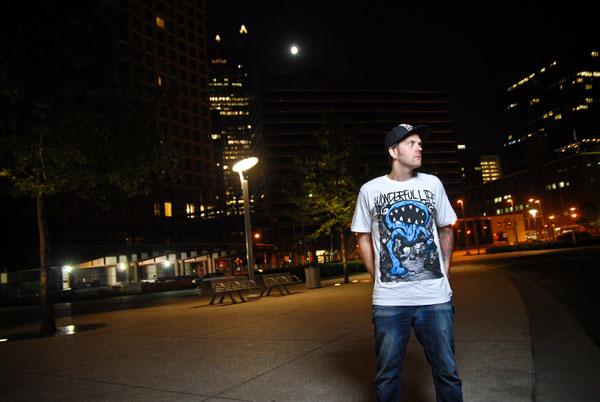