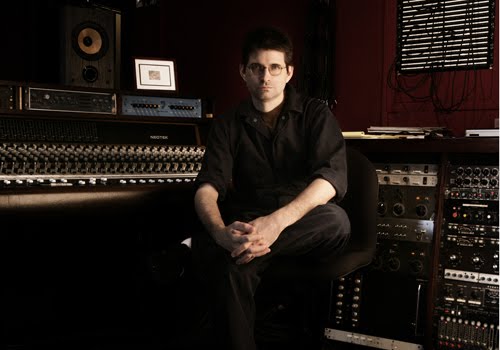 Steve Albini is a household name whether you realize it or not. He’s worked with just about every important band of the past two decades. He continues to work with up-and-comers on just about every new project he takes on. This is possible because of his Electrical Audio Studios, based in his current living quarters in Chicago. Albini helped revolutionize noise rock with his own projects, as well as, artists he has recorded. Chances are, you’ve probably heard his engineering and recording work without even realizing it. Artists like PJ Harvey, Nirvana, Don Caballero, the Pixies, The Jesus Lizard, and even Cheap Trick have worked with him.Albini single-handedly drove up the cost of the Interfax Harmonic Percolator distortion/fuzz, simply due to the way he used it. You can see the exhaustive list of musicians on his roster at Wiki:

Much to everyone’s delight, Albini has played in a few bands, namely Big Black and Shellac. I was lucky enough to catch up with him after a Shellac show in Pittsburgh last week. He spilled his gospel to us, straight-up, with no chaser.

Adam Rauf (BTS): First of all, thanks for letting me do this interview. Obviously, you guys have been around for a long time and putting out fucking awesome records, so I think people want to know when the next one’s coming out.

Steve Albini (Shellac): We’re gonna record some stuff on Friday, and I doubt we have enough for a record, but there’ll be some stuff in the near future…sometime.

Rauf BTS: Do you plan on waiting until you have enough for a full length, or maybe an EP?

Steve Albini: We record songs and listen to them, and it may end up going on the album, or it could be anything, really.

Rauf BTS: What was it like playing ATP [All Tomorrow’s Parties, a festival in NY and the UK]?

Steve Albini: Good. The place that they have it is some sort of decaying country club in the Catskills [mountains]. And that place is…pretty falling apart, kind of decrepit…kind of a sleazy quality, which is charming the first few times, but after you’ve been there two or three times, is kinda shitty. But the people there are amazing, and the line-up of bands is really good, and the environment, with the musicians and patrons hanging out in the same facility is really great. The social thing is really fantastic, and we always enjoy playing there.

Rauf BTS: Because you record [at Electrical Audio Studios] and get to hear cutting edge bands all of the time, what are you into this year that you think people should get out to hear? 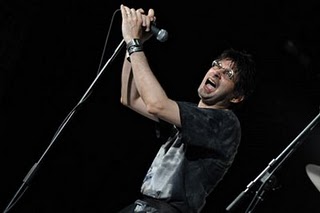 Steve Albini: You have to understand, I work on a couple records a week. So in a given year, there might be 50-100 bands that come through the studio. It’s really hard for me to pick something out and say “Listen to this.” I mean, on one hand, I don’t even know if some band I recorded is still together, or is releasing a record, or is happy with it, or want to be associated with me. I don’t know a lot of things about it. I mean, there are things that I’ve worked on that I get very excited about, like this one Dutch collectivist band, The Ex, that I’ve worked with many times. I love that band, I love working on their records. I thought when it left the studio, it sounded great. I don’t know what happened to it after that, but I love working with them. A lot of it is a personal thing; I get to work on stuff with people I consider friends, and I like that.

Rauf BTS: I know a lot of people often call out for “Prayer Song,” which is the Shellac song that practically everyone knows. Do you ever get tired of playing it just because it’s requested all the time, or is it still fresh to you?

Steve Albini: I never thought that for a minute. We don’t bother playing the song if we don’t want to play it. The rationale behind improvising the set is that you can decide what songs are fun to play and play them.

Rauf BTS: Yeah, I saw you and Bob discussing the set-list on stage right before you started.

Steve Albini: Yeah, when there’s a lull in the action, we’ll talk about the next few songs we want to play and do them. It’s only after you do them that you can discern if it was a good or bad idea. I mean, I was happy with the selection of songs we played.

Rauf BTS: Agreed, it was fantastic. I’ll just leave you this last bit as a final question. Countless people have quoted your early 90s Negativland article “The Problem with Music” and not properly attributed it to you, first of all. But do you feel that the article still holds up after all these years? 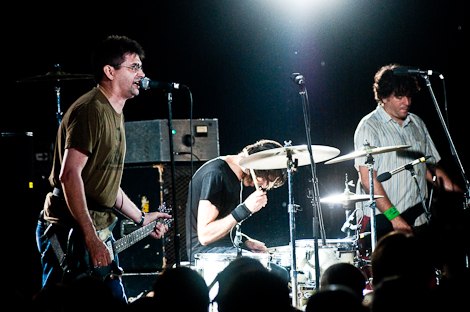 Steve Albini: Well, you know, none of the stuff I wrote was an “invention” of mine. If you have enough conversations with bands about their experiences, you’re going to learn all of that stuff anyway. What I was trying to do was educate. I wanted to let my peers know that this generation of music business cocksuckers was not any different than the past 50 years of music business cocksuckers. They did not have the band’s best interests at heart, and the bands, as far as the music industry’s concerned, are interchangeable and disposable. That was the concept I wanted to impress on my peers, because I didn’t want my peers…my friends, people I dealt with everyday, I didn’t want to see them get run through the ringer anymore.

So that’s the reason I wrote that article. Not for a general audience to clue them in to the music industry, but basically for my peers, who have been tempted by these music industry schmucks. In the back of their mind, they’re thinking, “Maybe we can outsmart them. Maybe we can set it up to work to our benefit.” I just wanted to disabuse them of that notion, and explain some of the traps that they could fall into.

I can’t really pass judgment on bands that choose to work with major labels. In a lot of cases it’s done out of ignorance, and in a lot of cases it’s because they feel they don’t have any other options. So I can’t really fault a band that does it. But at the very least, I felt like if I knew these things about how the industry worked, I would be being remiss if I didn’t let people know about it.

Rauf BTS: Right on. Do you feel that any of that has changed?

The record industry is dead and gone. It’s never going to come back. Bands will continue on. They will continue to have healthy careers. But selling records is going to be a very small part of that. It’s going to be more about playing live and having direct interaction with your fans through websites and shit like that.

Rauf BTS: Well thank you for taking time out to do this interview and hope to see you again soon.

Steve Albini: Thank you as well.