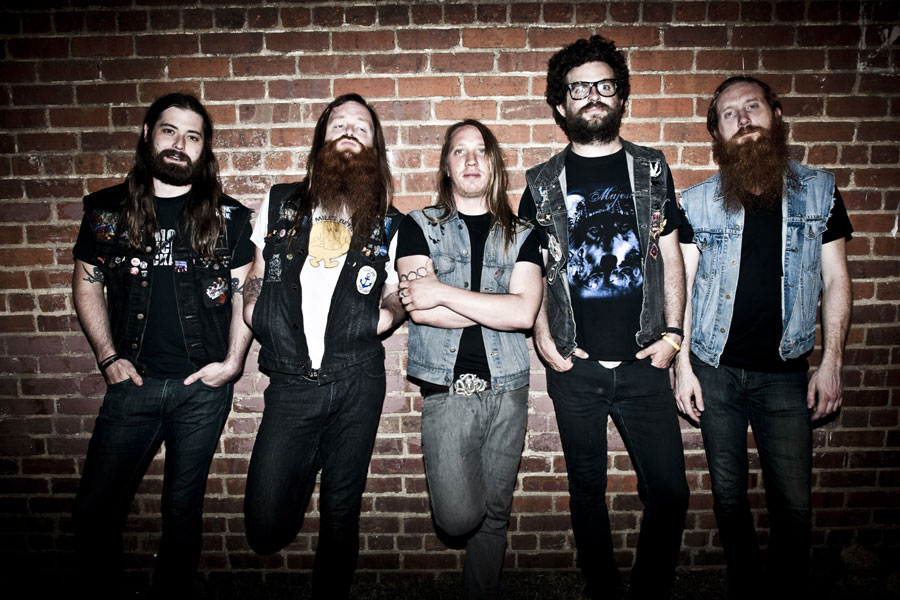 For not being from Earth, Valient Himself has become one of the planet’s most politically and philosophically outspoken inhabitants.

Over the past decade, his band Valient Thorr has preached messages of unity, peace and partying from the pulpit of rock ‘n’ roll. The group claims to have traveled to Earth from the city of Burlatia located inside of the planet Venus. Although the motives of their extraterrestrial mission aren’t fully clear – it’s quite evident that their blistering sound is here to stay.

Their new album Stranger (Volcom Entertainment) is a full-throttle follow-up to 2008’s Immortalizor. The guitar work is incredible – oftentimes sounding as if guitarists Eidan and Sadat Thorr have evolved extra digits to keep up with the mind-bending physics of their atomic hammer-ons and pull-offs.

It’s a Monday night and Valient Himself is sitting in front of a long mirror at a tattoo shop in Pittsburgh’s South Side where Eidan Thorr had just finished getting some fresh ink. Valient has recently returned from a taco devouring expedition and is ready to get down to business. He has a lot to say about the new album and quickly launches into an animated rant. 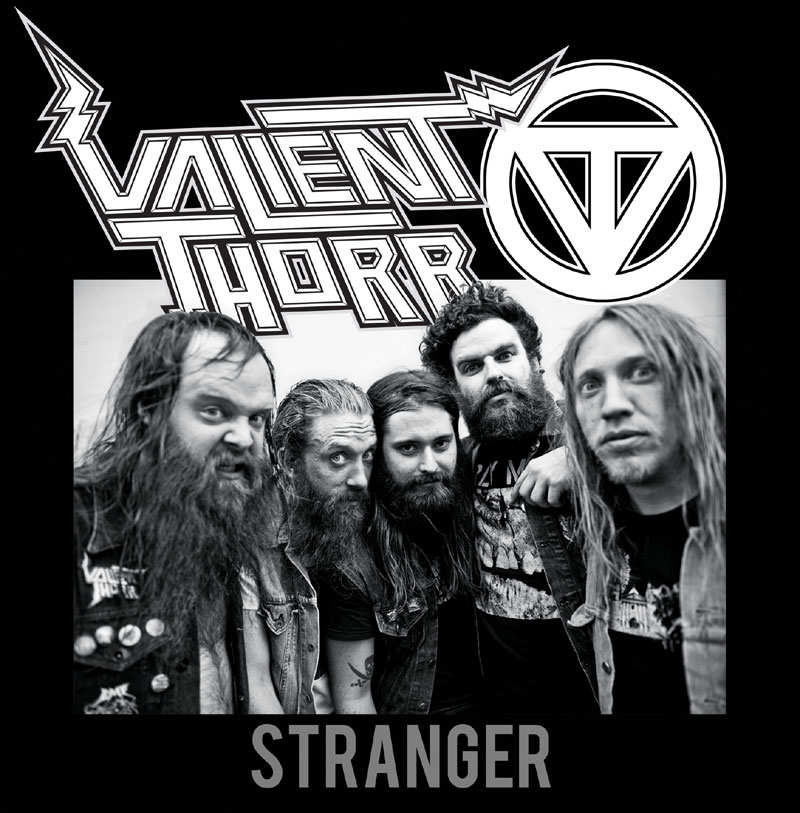 “Each [album] talks about different things like how we came here, why we are here, about now, about the past, and about the future,” Valient says, as a tattoo gun buzzes from across the room.

Wearing a red western shirt, impossibly tight black jeans and his signature red wrestling boots he explains that the new album addresses a handful of current issues plaguing the U.S. and the world.

“It’s less about having to call out names,” he says, in regard to the new album. This is in contrast to their 2006 release Legend of the World in which G.W. Bush became a central thematic villain.

“We’re talking about the guys who finance the bullets for wars. The reason wars are there,” he says.

“Exit Strategy,” which became one of the key anthems on Legend of the World, focuses heavily on the call for peace. Now that the troops have begun the painstakingly slow withdrawal process the new album looks toward their return.

“What are they coming home to? Gigantic financial crisis that not only affected our country, but the whole world. Lock up everybody in the most unbelievable debt that they could and tempted them like drug dealers do to spend more and more and more,” Valient says, snapping his fingers furiously.

The new album keys in on concepts such as excessive American consumerism and corporatization on tracks like the punk-rock choppy “Gillionaire” and the shred-tastic “Habituary.” The later focuses on the American drive to pursue the path of materialism over personal growth and inner development.

Valient is truly passionate about these subjects. His tone is steeped in honesty and his eyes are fiery – he goes on for several minutes and then stops suddenly.

“I don’t know – I’m fuckin’ rambling, man. I could go off in about 15 different directions with a conversation like this,” he says.

Valient quickly finds his train of thought and sends it blazing back down the tracks.

“What [Stranger] was really supposed to do was start dialogues, you know. Start smart dialogues – not just a bunch of people going ‘these guys are communists,” he says. “There are a lot of ignorant people in this country and this is meant to – not to point fingers at them – but to say ‘hey, if you read a little bit maybe you’ll understand some of this stuff.’” 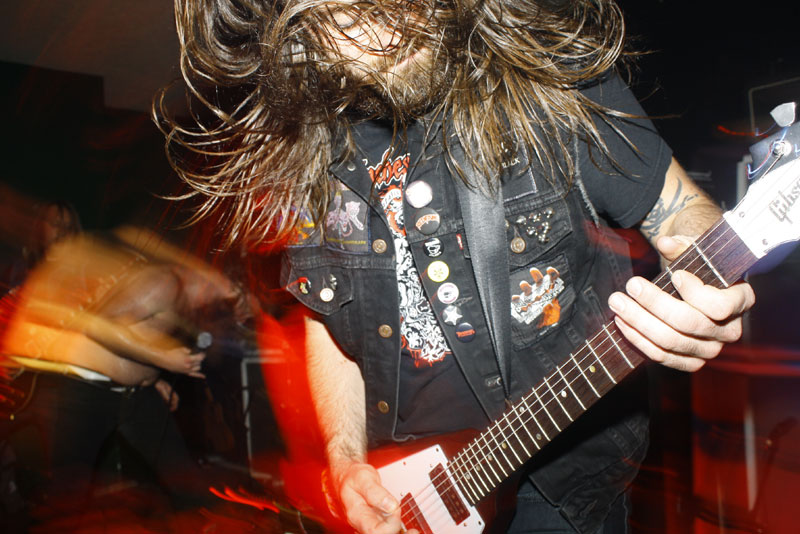 Valient’s mission may be to help his audience (even the ignorant ones) understand life on Earth from an outsider’s perspective. He explains that there are many ways to interpret the message of the new album. He says each band member attaches a different personal meaning to the material. Valient’s own take on Stranger is an interesting mix of imagery and words from testosterone-filled Sly Stallone and science fiction writer Robert A. Heinlein.

“The most important one for me is – I think of it as like a fuckin’ modern Rambo,” he says.

He talks about the difficulties faced by soldiers who have seen unspeakably horrible things and are now forced to acclimate back into civilian life in a tough economy.

“People come back and they’re feeling like a stranger in their own habitat,” Valient says. “A stranger in a strange land.”

Despite his grizzly rock ‘n roll appearance and wild demeanor – Valient is quite educated. He holds a Master’s in Fine Arts and was a teacher before deciding to apply his alien abilities to music.

“That was just my Earth job for awhile. I taught figure drawing at East Carolina University after I got my Master’s for awhile. And then I taught autistic kids – 6th graders – for two years in Chapel Hill, North Carolina.”

He takes his passion for creating visual art on the road with him by offering to paint or draw portraits of fans for a reasonable prices. He explains that the worth of art depends on how much it means to someone and that he is always willing to work with collectors on a fair price. 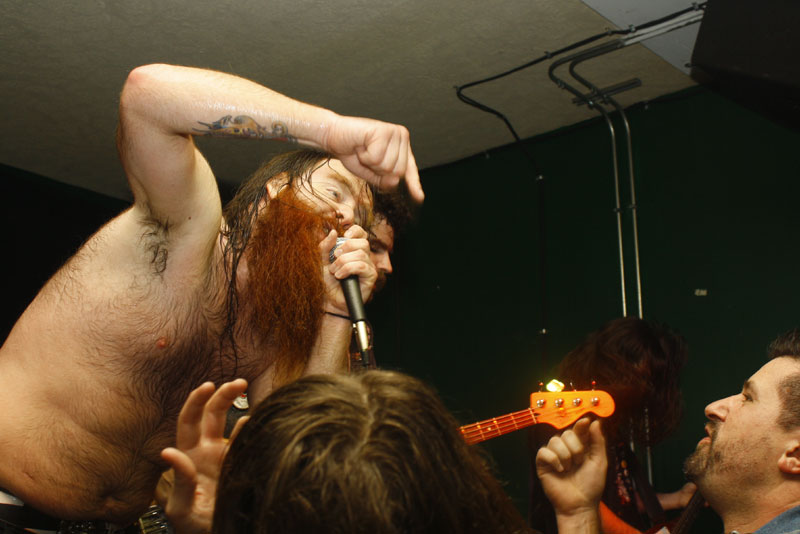 Valient even painted the cover of their last album (Immortalizer). It depicts Father Time wielding a sickle as a Venutian Tiger Owl (a tiger’s head on an owl’s body – a staple image on much their merch) soars through space. The album cover for Stranger is much different – a black and white iconographic shot of the band that he compares to classic photos of the Ramones, the New York Dolls, and MC5.

He said they had a photographer fly 3,000 miles to shoot with them over a three day span and they “ended up using something he did from two months before that just on a whim.”

This sort of tornado-like decision making typifies Valient Thorr’s style as a band – fast, loud and constantly on-the-go. Over the last few years the band has toured the world with legendary acts such as Joan Jett & the Black Hearts and Motörhead.

A particularly memorable show from the Motörhead tour finds its way into the conversation and his eyes light up. It was at the famed Roseland Ballroom – a monstrous club in downtown Manhattan that held hordes of hard-partying fans – including a certain WWE Superstar who was hanging out backstage getting ready to introduce Lemmy and company before they played.

“Oh man, that was a Hell of a show. I told Triple H that I’d put him in a figure-four. And I went ‘1986 American Bash,’” he says, making the appropriate hand signal. “His eyes got really big like he didn’t expect that at all.”

Challenging a hulk like Triple H to a match is a bold move for any man – let alone someone who donated a kidney just two years ago. In 2008, Valient’s Earth father desperately required a kidney transplant and the singer selflessly decided to undergo the operation to save Pops Thorr’s life. This has forced the singer to reevaluate his own personal habits on road. 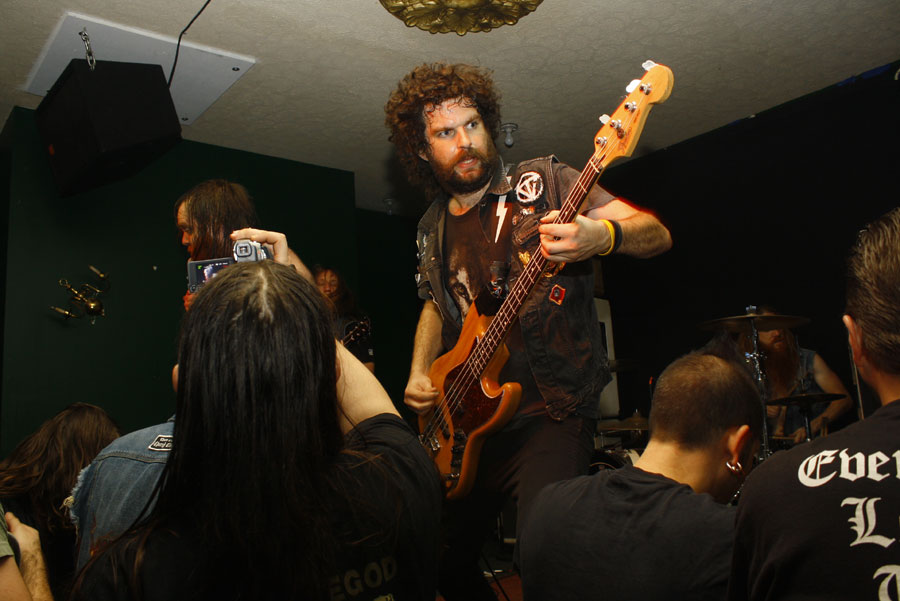 He claims he doesn’t work out much – except on stage. Valient’s antics in front of an audience are world-renown. He flails all over the stage with an intensity that could exhaust a tri-athlete. His band’s tight rhythm section, comprised of bassist Nitewolf and drummer Lucian Thorr, meshes effortlessly with the string-melting guitars to create the ultimate rock-aerobics soundtrack for Valient to push his physical limits to on a nightly basis.

“When we do our own tour – like this tour – we’re getting a full hour workout every night and I totally can tell a difference than when we do a thirty minute set opening up for somebody like Mastodon,” he says.

On this night at the Smiling Moose in Pittsburgh, Valient jumps down into the crowd and instructs everyone to sit on the floor. He then leads the crowd in a synchronized maneuver that looks like a cross between rowing a boat and headbanging.

Extra special thanks to YinzerParty.com for providing all of the superb live photos and supporting the Pittsburgh party scene.

Catch them on tour with Howl (Relapse Records) and Junius.

For More Info on Valient Thorr visit the Official Website