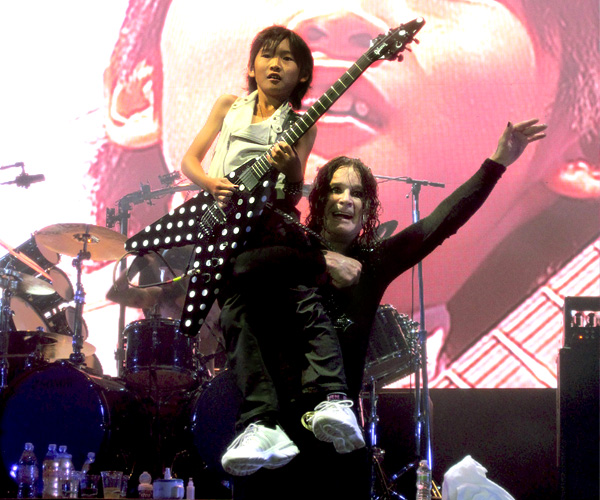 So about a week ago, Blow The Scene contributor and graphic artist, Larry West roles into the office with some pictures he took at Ozzfest, August 22 in Camden, NJ. And to be honest, until Larry zipped in with his photo stack, I didn’t even know Ozzfest was still around. But sure enough Ozzy is still baby-steppin across stages all over the states, and for this year’s final show date, he brought a special guest.

I took a look through Larry’s stack of photos and came across a photo of Ozzy Osbourne with 9 year old Guitar Prodigy Yuto Miyazawa. And for those of you who missed the boat, Yuto Miyazawa became an overnight celebrity when he posted a video of himself on YouTube last year covering Ozzy’s “Crazy Train” to a T – solo n’ all -gathering over 1.5 million hits. Ozzy decided to have him come out and play “Crazy Train” with the band on the last Ozzfest date of 2010.

I had a feeling this picture would be a hit, and today Larry has confirmed that Rolling Stone, Zimbo, and tons of other online and media outlets have picked up this photo.

Check out the August 22nd Performance!

Here is Yuto performing the song live on Ellen in 2009: