This is something near and dear to my heart. Yesterday I read the following news on 64 punks in Aceh, Indonesia who were arrested while attending a charity concert for orphans for doing nothing wrong but having punk hair cuts! Ridiculous right? I thought so. So while talking to my friend Thom of Black Kites / Less Life (who shares my political awareness), I said, “There has to be something we can do!” And then it hits me. Start a petition at Change.org to get the pressure on to release these innocent punks who are guilty of nothing more than trying to help their fellow humans by hosting a charity concert. Now they being held in a detention camp where they cannot go to work, cannot suport their families, cannot contact the outsite world. The are being forced into communal baths, forced to pray, doused in cold water, have had their heads shaved, and their HUMAN RIGHTS ABUSED!

So Start a petition I did!

This petition has now gone global and viral! Thank goodness! You can sign it HERE! and PLEASE DO SO and REPOST!

You can REPOST by grabbing this short link – http://goo.gl/bNPz8

Here are some news clippings on what is happening to get you up to speed:

Also If any wants to help get the word out and contact hard news outlets with me – please contact me at joshua@blowthescene.com

We got to keep the pressure on until these punks are set free and Aceh police stop targeting punks in parks, coffee shows, and charity shows! This is something that affects all of us in the worldwide music community! Let’s do something together! 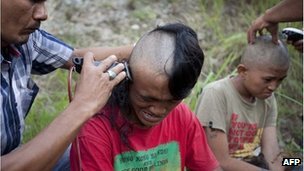 Dozens of young men and women have been detained for being “punk” and disturbing the peace in Aceh, Indonesia’s most devoutly Muslim province. They are being held in a remedial school, where they are undergoing “re-education”.

Rights groups have expressed concern after photographs emerged of the young men having their mohawks and funky hairstyles shaved off by Aceh’s police.

They look sullen and frightened as they are forced into a communal bath.

…
The 64 punks, many of whom are from as far away as Bali or Jakarta, were picked up on Saturday night during a local [Charity] concert [for orphans].

…
Mr Leo stressed that no-one had been charged with any crime, and there were no plans to do so.

They have now been taken to a remedial school in the Seulawah Hills, about 60km (37 miles) away from the provincial capital Banda Aceh.

“They will undergo a re-education so their morals will match those of other Acehnese people,” says Mr Leo.

But activists say the manner in which the young people have been treated is humiliating and a violation of human rights.

Aceh Human Rights Coalition chief Evi Narti Zain says the police should not have taken such harsh steps, accusing them of treating children like criminals.

“They are just children, teenagers, expressing themselves,” she says.

“Of course there are Acehnese people who complained about them – but regardless of that, this case shouldn’t have been handled like this. They were doused with cold water, and their heads were shaved – this is a human rights violation. Their dignity was abused.”

And they are still being held!

Deputy mayor Illiza Sa’aduddin Djamal says she doesn’t mind getting her hands dirty in her crusade against the punk community of Banda Aceh, proudly telling of how she has supervised police raids at cafes and city parks in recent months..

“The presence of the punk community is disturbing, and disrupts the life of the Banda Aceh public,” Illiza told the Jakarta Globe.

One of the 64 detainees, a punk music fan from Medan, North Sumatra, said he had traveled to Banda Aceh to take part in a concert that aimed to raise money for orphans. “What is going on here? I work as a contractor for a bank in Medan. I’ll probably be sacked for not coming in to work for a week,” said the man, who asked to remain anonymous.

“Their morals are wrong. Men and women gather together, and that is against Islamic Shariah,” she said. She guessed that the number of punks in the town was around 200.

The punks in custody range from teenagers to people in their thirties. Illiza said that there had been some as young as twelve years old at the concert, but that they had escaped the police raid. Fuazan, 20, an Acehnese punk whose head is now roughly shaved, said he was not impressed with his treatment at the hands of the police. “What did we do to deserve arresting?” he asked, looking troubled. “We didn’t steal and we didn’t bother anyone. The punk community in Banda Aceh is not involved with criminality.”

“So what’s the crime that justifies us being brought to this camp? This country hasn’t yet made it illegal to express yourself, right?” “And what of our livelihoods? Please help us,” Fuazan said.

“How are we supposed to support ourselves now that we’ve been brought here?” Illiza, who claimed she has the support of the public, said the police would continue to hunt for punks in Banda Aceh. “We will keep conducting raids until they’re all caught, then we’ll bring them for reeducation here.”

“Aceh is a Shariah region,” Illiza added. “Everyone should obey it and the punk community is clearly against Shariah.” “This training will be an example in Indonesia of the reeducation of the punks.”

Concerned musicians and people from all over the world are paying close attention to this!

We are demanding their immediate release and their well-being be confirmed by human rights groups and outside press!

We are demanding that no more punks be detained or arrested for expressing themselves!