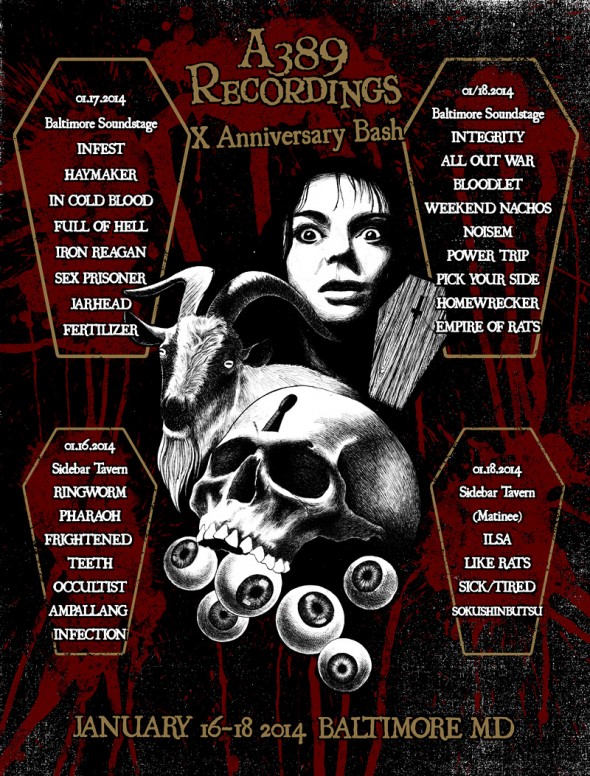 The full two-day itinerary for the massive tenth installment of A389 Recordings‘ annual label Bash in Baltimore, Maryland is now finalized, as the stellar gathering is now just over one month away.

Sponsored by Invisible Oranges, the A389 X Bash will see A389 turning a decade old, the massive melee to be held on January 17th and 18th, 2014. The newest and final show of the two-day massacre has just been confirmed, with the declaration of a second Sideshow, confirmed to lead off the festivities Thursday, January 16th. The newly locked gig will showcase Pharaoh, Occultist, Ampallang Infection, Frightened Teeth (Members of Frightener and Pulling Teeth playing Frightener songs) and headliners, Ringworm.

The full lineup and running order for both days of this now monumental hardcore/metal celebration can be found below, including exclusive performances from All Out War, Infest and Haymaker, a one-time Bloodlet reunion set, the exclusive one time performance from Integrity‘s Systems Overload lineup — the first in over twenty years — Full Of Hell, Noisem, Empire Of Rats, Iron Reagan, Power Trip, Ilsa, Weekend Nachos and more.

Weekend passes are available, individual day passes for the main events, and tickets for the Sideshows. The Sideshow venue shows are limited to 100 humans; advance tickets are highly encouraged.