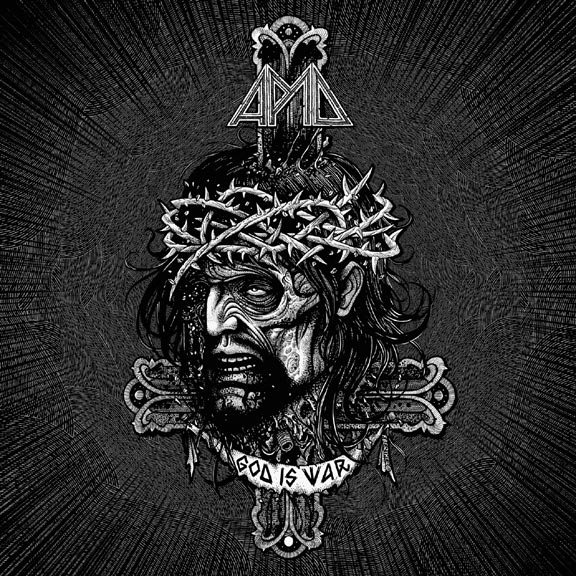 One of our favorite new acts, All Pigs Must Die, have just released the album artwork for their debut full-length on Southern Lord, entitled God is War. This LP follows the highly regarded underground release of their self-titled E.P., which hit streets via the band’s own Nonbeliever Records in 2010. The artwork was drafted by artist Florian Bertmer, who is also responsible for the artwork on APMD’s self-titled EP.

For those just tuning into All Pigs Must Die, consider this your late pass. Comprised of Ben Koller (Converge, Acid Tiger) on drums, vocalist Kevin Baker (The Hope Conspiracy), guitarist Adam Wentworth (Bloodhorse) and bassist Matt Woods (Bloodhorse), the band is forging their own chapter in the US resurgence of Swedish metal meets d-beat punk backbone, first made popular in the underground of the US during the 90s by bands like His Hero is Gone and From Ashes Rise. Europe has long had the jump on badass, d-beat, metallic-hybrids, so its nice the US is finally starting to shift the paradigm from the plethora of copy-paste riff factories that constitute much of the American metalcore scene. If you dig bands that look to Europe and years past for modern inspirations on making tunes by the likes of Trap Them, Tragedy and Trash Talk, this is your cup of tea. Tired of metal riffs into cheesy breakdowns? Like your d-beat blackened with some Swedish metal influence and hardcore vocals on top? Look no further.

We recently caught All Pigs Must Die here in Philly and we have a exclusive photo gallery for your viewing pleasure.

We’ll be keeping up with the band as more news become available.

For more info and live dates check out the All Pigs Must Die Facebook profile.