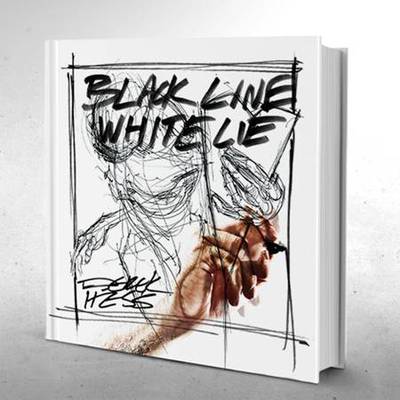 Black Line White Lie is the long overdue book featuring over 275 black and white images by artist Derek Hess. This book covers over 20 years of his black and white drawings from images of his earliest flyers to some of his more recent works like Cancer of the Soul and Valentine. Derek dedicates this huge 300 page book to his fans which also includes a chapter of over 70 tattoos that people have done of his works.

Internationally-known artist Derek Hess has spent the past twenty years creating fine art and rock poster art that has not only made him a household name, but has also caught the attention of both the Louvre and the Rock and Roll Hall of Fame where his work is featured in both institutions permanent collections. In addition to numerous CD covers he has been featured on TLC, MTV, Fuse, VH1, Alternative Press, Spin, Juxtapoz Magazine and many others. After years of creating art for well-known bands such as Deftones, Thursday, Every Time I Die and Taking Back Sunday, and working on his own fine art, Hess has finally compiled a book of his high in demand Black and White drawings.

If you missed, Blow The Scene’s Tim Bonner caught up with Derek Hess for an in-depth interview where Hess discusses his artistic styles, influences, training, and much more.