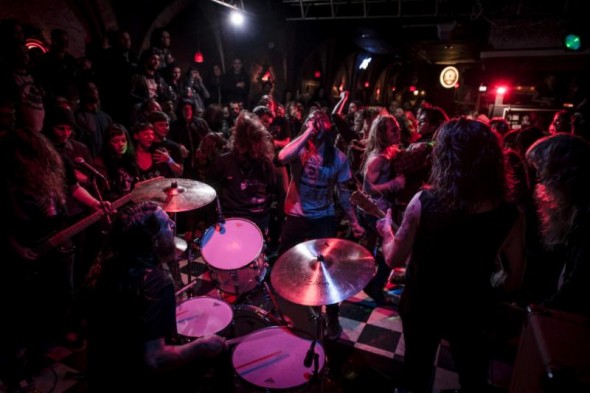 Vancouver’s Baptists recently completed work on their second full-length album, the follow-up to their 2013 debut Bushcraft. Entitled Bloodmines, the new album was recorded at Godcity Studios in Salem, Massachusetts with with Kurt Ballou and will be released via Southern Lord worldwide in September.

Baptists continually find new ways to express their rage and with Bloodmines they have created a memorable and commanding album. Official release dates and previews of the album will be released throughout the Summer months.

New songs from Bloodmines have been unloaded live by Baptists in recent months, including this ripping Rain City session, recorded in their hometown, playing below.

Additionally, Baptists is one of dozens of acts confirmed to raid Tucson, Arizona on October 16th, 17th, 18th and 19th for Southwest Terror Fest III: The Western Front, joining Neurosis, Sunn O))), Goatsnake, Pelican, -16-, The Body, Eagle Twin, Author & Punisher, Primitive Man, Obliterations, Secrets Of The Sky, Godhunter and tons more. More on SWTF can be found HERE, and further Baptists tour actions will be disclosed over the coming weeks.