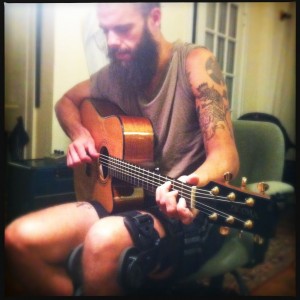 Baroness, in a letter to their fans, have issued their first post-accident update since August. The statement, with new photos, is available via baronessmusic.com.

The four band members and five person crew suffered a variety of injuries in the harrowing Aug. 15 accident which saw the band’s bus plummet 30 feet down off of a viaduct outside of Bath, England. The East Coast-based band were in the final week of an extensive European tour following the release of their critically-acclaimed double album, Yellow & Green.

*Currently the band’s website is down due to an major influx of traffic, Pitchfork have detailed the letter here.

A few excerpts from the letter:

“I remember the sound of the air-brakes failing, and the panicked cursing of our driver as we slowly realized how desperate the situation was… While we were airborne my eyes met with our driver’s… We had spent enough time in the air to appreciate, make peace with and accept a fate we thought inevitable, and we looked at one another with a horribly silent “goodbye” in our eyes… When the bus hit the ground, I flew like a missile into the windshield.”

“I have used this time, stuck inside my own head, to consider the importance of music and Baroness in my life. I can say, after nearly 6 weeks of reflection, that I feel more resolute and passionate about our music than ever. I have come to realize the importance of time in this particular equation, that is, I have none to waste and none to spare. There is no better moment than now, broken and in physical stasis, to devote ourselves more fully towards our art than ever.”

We caught with Baroness singer John Baizley for an exclusive video interview in May following a Philly concert with Meshuggah and Decapitated.