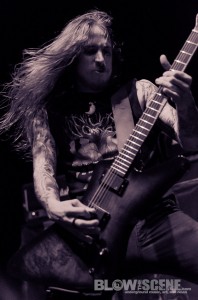 Savannah, Georgia’s Black Tusk, are in the midst of their first ever European headline tour. The run will wrap up this week with a festival appearance in Tonsberg, Norway with an appearance at Slottsfjell Fest.

Black Tusk have confirmed a string of North American headlining dates for this fall. The run kicks off October 13th in Johnson City, TN and is scheduled to wrap up October 24th in Portland, Oregon. The band is touring in support of their latest release Set The Dial which is streaming in full below and is available at Relapse Records.

If you missed it, we recently interviewed and photographed Black Tusk during a Philly performance with Municipal Waste, 3 Inches Of Blood, and Corrosion of Conformity.