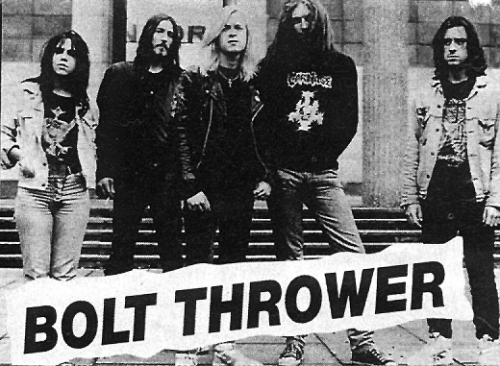 After only a handful of North American dates in the past few years, limited to Maryland Deathfest, Bolt Thrower has announced the Return To Chaos Tour. The band will perform seven shows across the US in May. The confirmed dates are listed below, and include Maryland Deathfest, Chaos in Tejas, as well as club shows in Pomona, CA, Seattle, WA, Chicago, IL, and more.

Bolt Thrower have continued their ‘quality not quantity’ approach to playing live and that has definitely paid off. In 2010 they played a number of shows and festivals across Europe, and from playing more intimate underground shows (in keeping with their roots), they can also pull off playing to a festival crowd of 30,000 people. That’s why, as they reached and moved beyond their 25th Anniversary, Bolt Thrower are still at the top of their game.

Bolt Thrower adds: “And it’s our pleasure to announce that for all the club shows we’ll be sharing the stage with our fellow compatriots Benediction; and for the Pomona and Oakland shows we’ll also be joined by the mighty Autopsy”