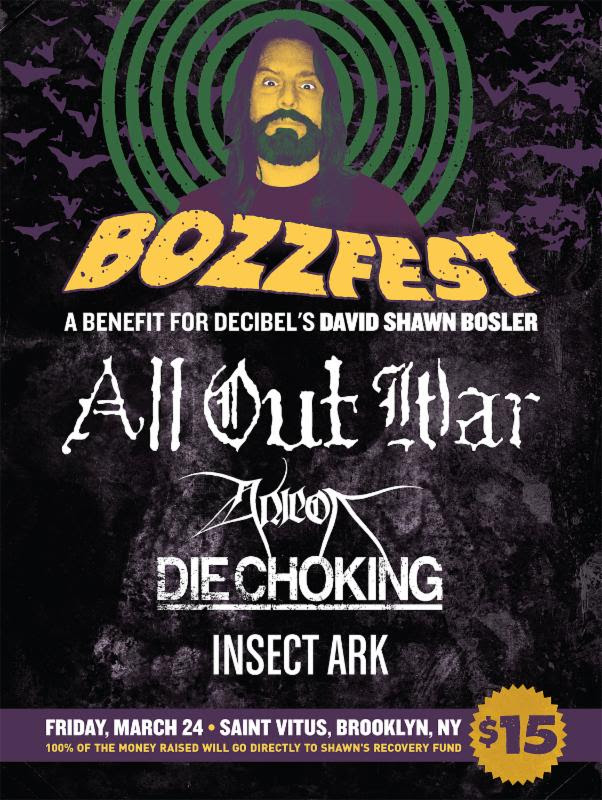 Over the Christmas holiday, longtime Decibel contributor David Shawn Bosler was in a serious car accident that left him with a horrific list of broken bones and injuries, requiring multiple surgeries and putting him on a long road to full rehabilitation.

On March 24th, 2017, Saint Vitus Bar in Brooklyn is hosting a benefit show, with 100 percent of the money raised going to Bosler‘s recovery fund. Decibel has assembled a true, once-in-a-lifetime bill for the cause, topped by a rare live appearance from savage metalcore stalwarts ALL OUT WAR. They’re joined by local black metal philosophers ANICON, brutal Philly grinders DIE CHOKING, and the hypnotic bass soundscapes of INSECT ARK.

There will also be some one-of-a-kind items up for raffle to help Bosler and his family. The collective range and power of the bands who have generously donated their time and support to this fund is a testament to Shawn’s reach in the world of extreme metal and beyond, and we hope locals will join us at Saint Vitus Bar to support him by taking in an amazing show! Tickets are just $15 and available at TICKETFLY.

If you can’t make it, but still want to contribute, please consider donating to the Bosler family’s GoFundMe campaign HERE.