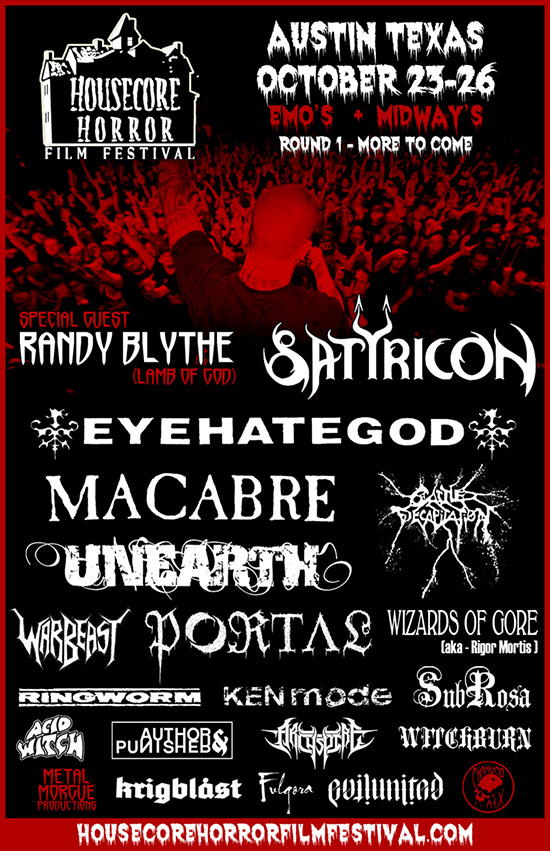 Cattle Decapitation will be performing a brand new song off their upcoming 2015 Metal Blade release at the mid day show of the Housecore Horror Film Festival. The show will be at Midway‘s on Friday, 10/24 with Unearth, Brian Posehn, Origin, fellow San Diegan and friend Author & Punisher, and Evil United! The band is looking forward to debuting new material for the festival crowd. Later that same evening, Cattle Decapitation‘s vocalist Travis Ryan will be performing vocals with Wizards of Gore (the legendary gore thrash act Rigor Mortis under a different name) for his all time favorite Rigor Mortis track “Foaming at the Mouth”, which will mark this the band’s first time playing the song in over 25 years!

“Monolith Of Inhumanity,” the most recent slab of sonic annihilation Cattle Decapitation, landed at #32 on the Billboard Top Independent Album Chart. “Decade of Decapitation”, the band’s vinyl box set, celebrating 10 years of releases on Metal Blade Records. The band’s entire Metal Blade discography: “To Serve Man” (2002), “Humanure” (2004), “Karma.Bloody.Karma” (2006), “The Harvest Floor” (2009), and “Monolith of Inhumanity” (2012) are all available in colors, handpicked by the band. The colors reflect the concept or color scheme behind each album. Fans will also have the opportunity to pick up a collectable box that comes with an exclusive t-shirt, both with brand new art from longtime Cattle Decapitation cover artist, Wes Benscoter. Additionally, “To Serve Man”, the band’s debut full-length, and their sophomore effort “Humanure” have been remastered specially for this release. Visit Metal Blade to claim your copy.