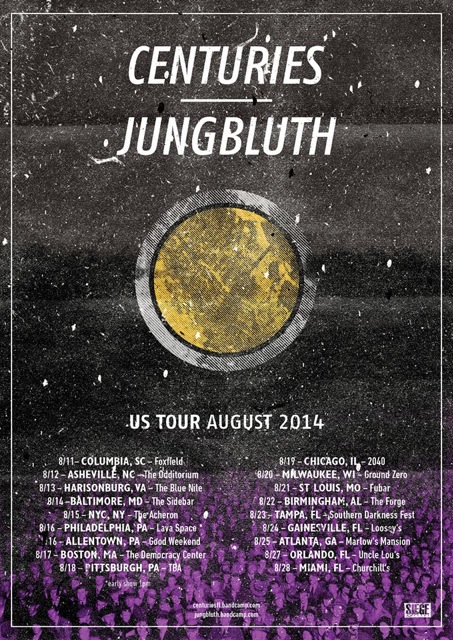 Florida outfit, Centuries, has announced a tour of the eastern half of the country in August alongside Jungbluth.

Following their debut LP, Taedium Vitae, released via Southern Lord in August of 2013, Centuries has taken their destructive, driven hardcore/punk to the road several times in support of the album. Most recently the band ripped across the Western half of the US this April on a nearly month-long trek, and this August, it’s time for the other half to get brutalized. The tour runs from August 11th in Columbia, South Carolina, then rushing up the East Coast, bending out to the Midwest and then forging southward, closing down the trip on the band’s home turf August 28th in Miami, Florida, joined on all dates by German anti-fascist crew, Jungbluth. The highlight of the entire venture is both bands’ inclusion on the maiden incarnation of the three-venue Southern Darkness Fest in Tampa on August 23rd, joining Pelican, Phobia, Black Tusk, Weekend Nachos, Bongripper, A Storm Of Light, Lord Mantis, Primate, Magrudergrind, Mouth Of The Architect, Yautja and tons of others.