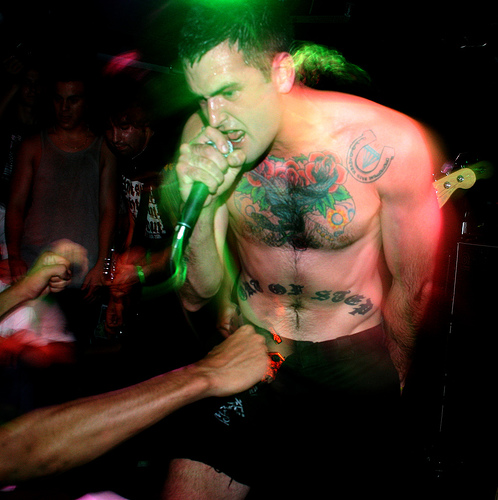 Bay Area CA’s Ceremony are set to release their forthcoming EP Covers, which will be released August 9th via Bridge Nine Records. The 6-song EP features cover songs from Urban Waste, Pixies, Crisis, Eddie and the Subtitles, Vile and Wire, and were recorded with Dan Rathbun as outtakes during the Rohnert Park recording session. The Covers EP pays homage to a few of the artists that have influenced Ceremony along the way and will continue to inspire them. Ceremony’s Covers EP is available for pre-order now on vinyl, limited edition CD and cassette at The B9 store.

Ceremony has had quite a year; they released their landmark effort, Rohnert Park, in June of 2010 to incredible amounts of critical acclaim. FADER called the album “an incredible record”, Alternative Press said it was “adventurous”, and Lambgoat said it was “one of 2010’s most intriguing records”. In support of Rohnert Park, the band toured the US, UK, Europe and Japan, played countless Festivals (like FYF in Los Angeles, Chaos in Tejas in Austin, and many more), and will be hitting the Vans House Party in Brooklyn tonight. This coming July, Ceremony is scheduled for an appearance at Sound & Fury Festival, followed by a European Tour – dates are below.

Ceremony was formed back in 2005 in Rohnert Park, CA and released the “modern hardcore masterpiece” (punknews.org), Violence Violence, in 2006 on Malfunction Records. That same year, Alternative Press coined Ceremony “one of the 22 bands who won’t stay underground for long” and shortly thereafter, the band became a part of the Bridge Nine Family. In 2007, they released the Scared People 7inch (which punknews hailed as the best EP of the year), followed by their full-length Still Nothing Moves You, which was a milestone release for the label. Fast forward to 2010 and Ceremony unleashed Rohnert Park, which is one of their career-defining releases and an absolutely extraordinary album.

Moving forward, Ceremony will be calling Matador Records their new home (the label is known for their work with bands like Sonic Youth, Pavement, Interpol, and many others). Bridge Nine owner Chris Wrenn said, “Today is a very bittersweet day, as Ceremony is moving on to Matador. We are sad to see them go, but so excited and proud of the band. Our relationship with Ceremony has been an incredible one over the years and we will continue to stay close with the band. B9 wishes Ceremony the absolute best, and are just as excited as everyone else to hear their next record.”

“Sick” – on Rohnert Park by Ceremony

Pre-order a copy of Ceremony’s Covers EP now at the B9 Store.