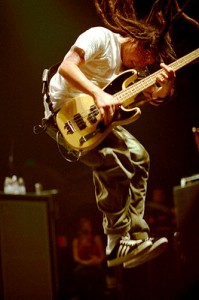 Deftones bassist Chi Cheng, who was left in a coma following a severe car accident in November of 2008, is reported to be making slight improvements as he recovers from home with mother and sister by his side. After several surgeries and countless doctors visits, Cheng is now in a partially conscious state, having the ability to move his legs on command. He is, however, unable to move or speak otherwise. A recent posting on the OneLoveForChi.com website by Chi’s mother describes the current challenges.

Chi’s brother Ming tells Revolver, “Once his health gets a little better, we’ll start looking into other options…but they don’t even do it (stem cell therapy) in the U.S. yet. It’s a miracle he’s still with us. He’s alive and kicking and he’s fighting, and I think there’s a reason for it. I’m hoping there’s a light at the end of the tunnel for Chi.”

We all hope there is a light at the end for Chi, his family, and friends.. If you would like to donate to Chi and his family, you can do so at OneLoveForChi.com.

We’ll keep following this story for any developments. 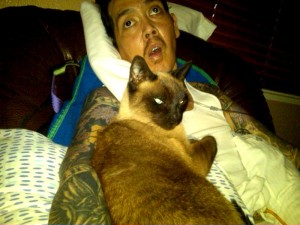