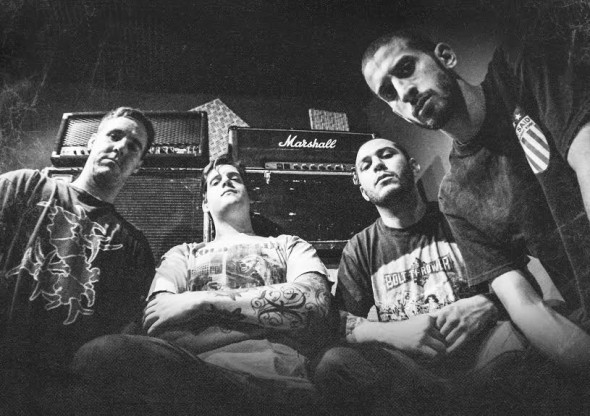 As their True Enemy debut LP is being prepared for release in just over a month, Southern California hardcore heathens, Disgrace, have slated a short but brutal East Coast US tour for mid-April. Scheduled around their scheduled performance at the annual 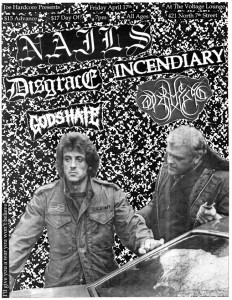 A recent interview by Shawn Macomber with Dan Seagrave, known for his works for Dismember, Morbid Angel, Entombed and countless others, was posted at Shock Till You Drop, the article featuring the artist’s new creation for Disgrace‘s True Enemy cover and much more.

Disgrace will strike out at backstabbers, cowards and religious zealots with pure fury through one of the most infectious, groove-heavy, death-influenced hardcore records in recent times with True Enemy. Featuring members of Nails, Creatures, Forced Order, and four-fifths of Twitching Tongues, Disgrace devastates with harshness of masters Merauder, Cold As Life and All Out War, yet taking on metallic attributes of early Bolt Thrower, Celtic Frost, Cannibal Corpse and Sepultura, delivering a modern, punishing metallic groove. Disgrace will now grab the scene by its throat with their debut LP, produced and recorded at The Pit in Van Nuys, California by vocalist Taylor Young (also of Nails, Twitching Tongues), and mastered by Brad Boatright at Audiosiege (Integrity, Nails, Blacklisted). True Enemy‘s thirty-four minutes of executioner style metallic hardcore have been shrouded in appropriately grim cover art by legendary artist Dan Seagrave. True Enemy will see release via Closed Casket Activities digitally, on CD and on vinyl on March 24th, the LP with a 24″ x 36″ poster as well as a digital download. Additional audio samples, preorder links, new tour dates and other announcements are impending.