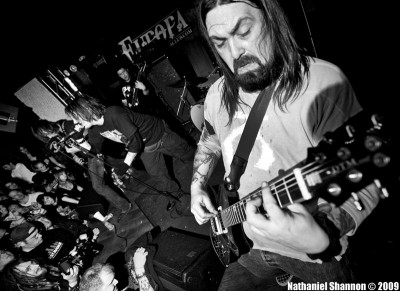 New Orleans’ hardcore blues-based dirge doers Eyehategod are featured in the November 2011 issue of High Times, on stands now! Get your grubby paws on a copy here.

Following a Summer of sonic destruction that included the Retox And Nihilism Over Europe Tour alongside Japan’s Church Of Misery and a slot on the sound-barrier breaking Power Of The Riff fest, the Louisiana derelicts will head out for another round of live abrasions this Fall and Winter. Check confirmed dates below:

In related news, Eyehategod unleashed an official live DVD earlier this year via MVD. Titled Live, the 88-minute production features multi-camera footage from 2009 (Baltimore, MD) and 2010 (Cleveland, OH), with bonus clips from the last show of their 2010 European tour and videos never before released before on DVD. Said Brooklyn Rocks of the production: “While musical trends come and go and numerous bands change their sound over time…Eyehategod will continue to pump out self-loathing Southern sludge for years to come. Both fans of Eyehategod and bands like Down and The Melvins are going to want to pick this release.” Added Cvlt Nation: “…a piece of EYEHATEGOD cinematic history.” A perfect dose of Black Flag meets Black Sabbath in ragged, live glory avail at Emetic Records.