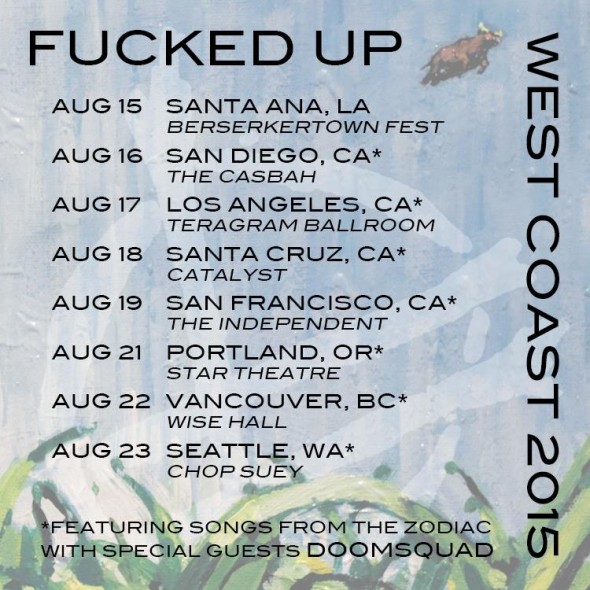 Fucked Up are one of the most prolific hardcore punk bands of our generation. Since their 2001 inception, they’ve challenged listeners with thoughtful artful chaos and a seemingly limitless drive for musical experimentation. Because of this, they’ve also become a record collectors worst nightmare; releasing over 80 recordings and collaborations on countless labels that include Arts & Crafts, Matador, Jade Tree, and more. Year of the Hare is the latest installment of their Zodiac themed releases. Over a two year period, it was recorded and constructed at Electrical Audio, Key Club Studios, and Candle Studios. Title track “Year of the Hare” is a 21 minute epic that frantically mixes traditional instrumentation, piano/synths, flutes and sax, experimental editing/soundscapes, and guest vocals from great Isla Craig into one dizzying experience while B-Side “California Cold” slowly builds and deconstructs over an 8 and a half minute stretch.

In support of Year of the Hare (out now on Deathwish), Fucked Up will expand their live lineup to 9 members by including friends DOOMSQUAD to embark on a string of exclusive Zodiac shows. Fucked Up will perform a different set of Zodiac songs each night; many of these songs have never been played live before, and this tour will allow the band to flex a more improvisational and experimental muscle, while retaining all of the power and frenzy of a Fucked Up show. The band will kick off an 8-show string of dates this Saturday in Santa Ana, CA – see all tour dates below.

Pitchfork recently posted a lengthy feature on Fucked Up, and the band also recently premiered an interactive video for their 21-minute-long track, “Year of the Hare”, which can be seen on their website. Stay tuned for more info coming soon.