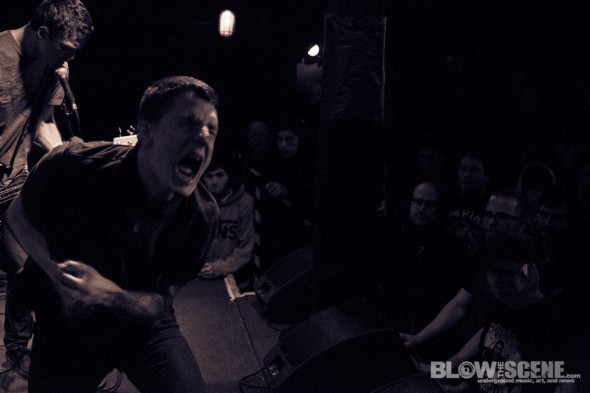 With a bestial eruption of noise-drenched/death-fueled hardcore which has set the underground ablaze in the past several years, crushing quartet Full Of Hell will unload their newest sonic assault, Rudiments Of Mutilation, late this Spring via A389 Recordings.

Responsible for releasing an epidemic of demos, singles, splits and a previous LP constantly since their inception only four years ago, Full Of Hell create a barrage of whiplashing metallic hate, psycho-drone feedback holes, and wall noise-drenched pedal attacks a noxious brew of Converge, Cursed and Pageninetynine gone the ways of Bastard Noise, early Napalm Death and Discordance Axis. The young crew performs their live shows with incredible conviction, catapulting their energetic hatesurge into the audience and inspiring all-out melees amongst the humans. Rudiments Of Mutilation captures more of these aspects than any previous recordings, penetrating with the most corrosive blasting attacks and noise infiltration from Full Of Hell yet, recorded with Kevin Bernsten at Developing Nations and mastered by James Plotkin (Khanate, Old, Phantomsmasher).

An A389 priority, Full Of Hell will dispense Rudiments Of Mutilation on LP, CD and digital delivery June 11th alongside the massive debut from thrashers Noisem and the newest album from the iniquitous Integrity. Following very recent tours with Gaza, Code Orange Kids, Homewrecker shows through this year’s SXSW and more, Full Of Hell already has a massive tour schedule planned for the coming weeks and more lining up through the Summer, including tours with labelmates Integrity, Gehenna, Seven Sisters of Sleep and others, performances at this year’s Maryland Deathfest and Chaos In Tejas, and a pending European tour, for starters.

Full of Hell US Tour dates