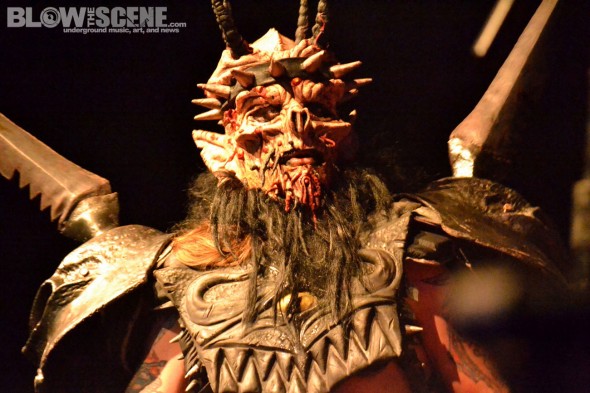 Intergalactic space mutants GWAR will kick off their North American tour dubbed the Fate or Chaos tour this Friday October 12th in Philadelphia, PA. Blow The Scene will be on hand for this opening date in Philly to deliver on another Philly Photo Review for your viewing pleasure. The tour will run through November 26th wrapping up in Pittsburgh, PA. Direct support on the tour will be provided by DevilDriver, with Cancer Bats and Legacy of Disorder rounding out the bill.

Quoth Oderus, “We are pleased as piss-punch to be back on the road with old buddies DevilDriver and Legacy of Disorder, and very stoked to also have Cancer Bats with us. They are from Canada right? Why do so many cool things come from a place they call America’s Hat? Who is to say that America isn’t Canada’s sweater? No matter! With a nod to departed Scumdog Flattus Maximus, let the games begin with a brand new show! Let the era of Pustulus Maximus begin!”

It was announced last week that Pustulus Maximus has new joined GWAR as an official Scumdog brother. Little is known about this being, other than that he has a skin condition where his face and feet are covered in painful pustules that can only be soothed by the application of savage metal, spoiled elephant semen or oral sex. Pustulus is also rumored to be half-deaf, which leads him to yell at everyone, which he does often, because he is convinced everyone in the band is ignoring him when actually he just can’t hear what they are saying. It is not known whether he crashed his Scumship into Antarctica or wandered up from the depths of GWAR‘s Antarctic fortress – all that is known is that he is here, now, and is ready to ROCK.

Pustulus made his live debut with GWAR performing a rendition of the Kansas classic “Carry on Wayward Son” as part of the AV Club Undercover Series. The video can be viewed below.

GWAR Fate Or Chaos Tour With DevilDriver, Cancer Bats and Legacy of Disorder

With Kepone and Iron Reagan