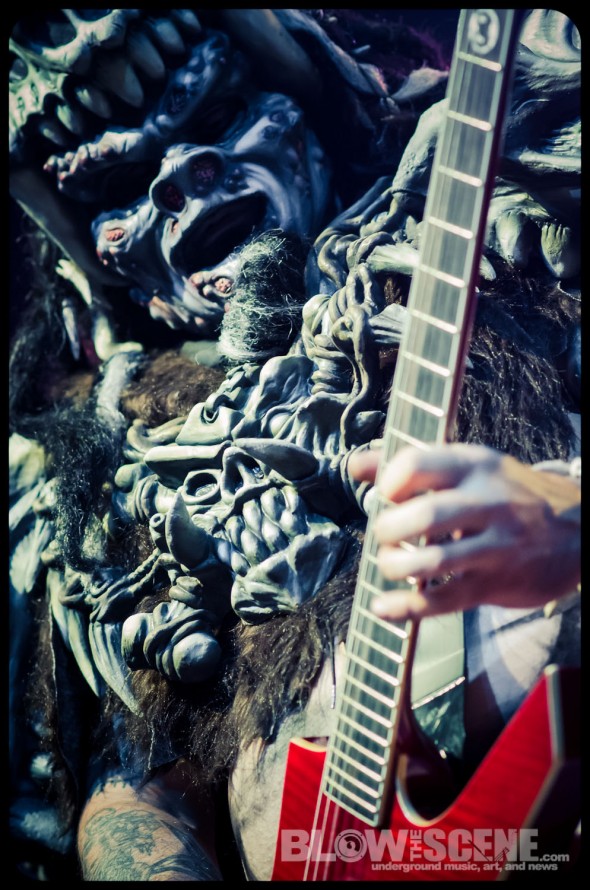 Masters of medieval metal, the mighty GWAR, are poised to return to the world of man as today they announced the first leg of their massive “Madness at the Core of Time” world tour, in support of their new album, Battle Maximus, which is out September 17th on Metal Blade Records. The tour, which features a completely brand-new show full of slavering creatures and deserving victims, is set to kick off October 2nd in Columbus, Ohio and runs through November 17th in Washington, DC. Tickets go on sale this Friday August 2nd.

Said verbose front-thing Oderus Urungus, “Our loyal slaves have been laboring ceaselessly to create the ultimate GWAR show, and for this they have received nothing but abuse and torment. I know our legions of loyal fans will be delighted to experience a whole new cast of ridiculous characters, all of whom shall meet exceedingly messy ends to the soundtrack of slaughter that our new album shall provide. Get ready world…GWAR is coming!”

GWAR shall be joined by deathcore heavyweights and label-mates Whitechapel, Richmond, VA thrashers Iron Reagan (featuring Municipal Waste singer Tony Foresta) and A Band of Orcs (who are actually a band of Orcs). The tour comes after an intense lead-up period, which featured the debut of a GWAR beer and GWAR B-Q sauce, several mini-tours and convention appearances, the second season of Oderus on FEAR.net’s sitcom HOLLISTON, and finally the fourth annual GWAR-B-Q.

“We’re extremely excited to announce that we will be direct supporting the almighty GWAR this fall. The tour will be hitting some spots we haven’t been in a while and we’re looking forward to having a blast on tour with them so come out and get GWAR’ed with us!”

Of course Oderus had more to say (when doesn’t he?). “Let me make something perfectly clear. DON’T commit suicide if your city/country/collection of mud-huts isn’t on the list. We can’t play every city in the world in one tour, as much as we would like to. There will be a whole year or more of shows in support of Battle Maximus, so either be patient, or take a fucking road trip!”

Battle Maximus is GWAR‘s 13th studio album, and their first since legendary Scumdog Flattus Maximus returned to the stars to fulfill his cosmic destiny. Check out the first track, “Madness at the Core of Time” and pre-order your copy of Battle Maximus HERE.

GWAR‘s Battle Maximus features twelve brand new tracks that not only honor their departed ally, but tells the story of GWAR‘s latest struggle against what may be their greatest enemy yet…the insidious “Mr. Perfect”, who has traveled through time itself to steal the power of GWAR–the power of immortality, and use this power to mutate the human race into his twisted vision of what the “perfect” human should be. Once again GWAR finds themselves as the only thing standing between the human race and the latest super-powered shithead bent on the destruction of GWAR and the enslavement of their worshippers.

Madness at the Core of Time Tour

With Whitechapel, Iron Reagan and Band of Orcs: