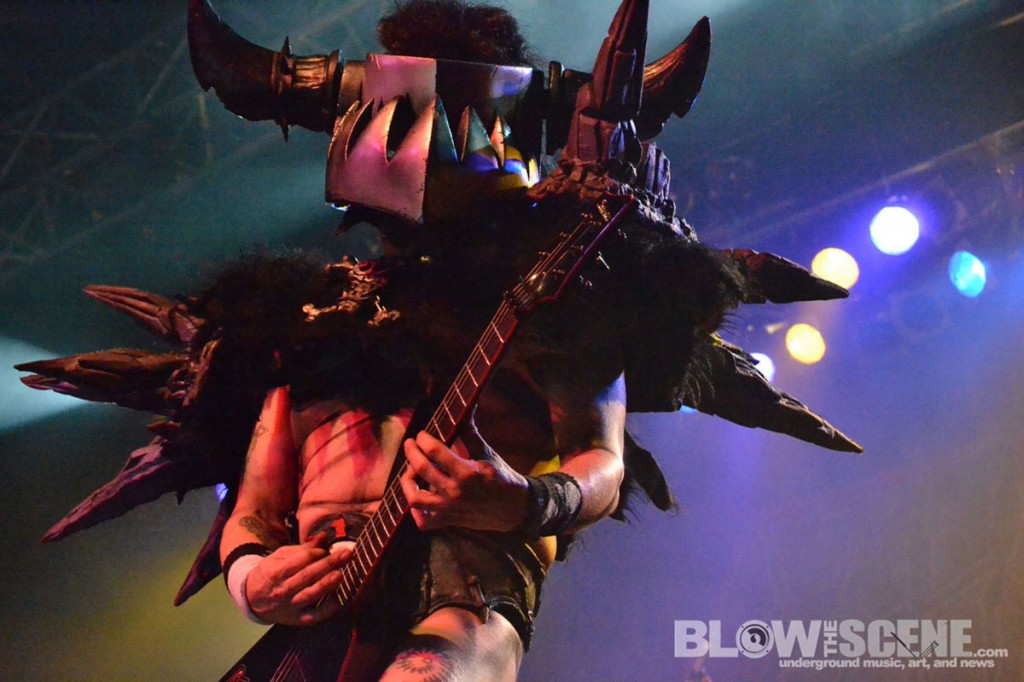 It was a little less than a year ago that the world was rocked by the passing of Flattus Maximus (Cory Smoot), back to the cosmos from whence he came. And since that day fans of Gwar have wondered how the mighty overlords of Gwar would deal with the void it left within the band. Gwar responded the only way they knew how-by soldiering on-and continued to play as a four-piece. But from the very beginning of that phase, the quest began to find the new Scumdog that was in every way as magnificent as his predecessor. Today the members of Gwar are pleased to inform their legions of followers, and even more so their many enemies, that once again the band is whole, with the proclamation that long-lost cousin of Flattus, Pustulus Maximus, has officially joined the band in the position of lead guitarist, and will join with the group on their upcoming “Fate or Chaos” tour.

Pustulus offered his first words to the press with the following, “At this point I have nothing to say to the press, even though I am talking to you. I will let my guitar speak for itself. But let me add that I am blood-sworn to honor the legacy of the great Flattus and indeed the whole Maximus tribe. I didn’t come here to fuck around. HAIL FLATTUS!”

But how did all of this come to pass? It was easy to get a quote from Gwar lead singer, Oderus Urungus:

“Naturally we were devastated by the passing of Flattus. But we turned that grief into rage and set about the task of finding a new guitar player. The first thing we did was sound the mighty Horn of Hate, and alert all Scumdogs, scattered across the galaxy as they are, as to what had occurred. What people didn’t know about Flattus was that was is part of a huge tribe of brutish warriors, The Maximus Clan. They are at the core of any Scumdog Legion worth its blood! Planet Maximus is just crawling with them!”

Oderus farted, blowing a hole in the wall, and continued. “Many of the tribe had fought and even played in bands with Flattus, and we began to get messages from across the stars. The Scumdogs were coming! Coming to Earth to lay tracks on our new album, and pay tribute to the mighty Flattus. Soon the War-Barges of Maximus tribe members began to appear in Earth’s orbit…and land outside our great temple! Bubonis, Infectitcus, Fartacus, and many more-all have participated in the creation of the songs that shall be on our new album, which will be out sometime next year. But it was not until the hulking form of Pustulus appeared at the studio door, bloody guitar in hand, that we knew we had our new member. Here was a being that was supposedly born with a guitar in his fist, which of course resulted in the death of his beloved mother, whose body he immediately devoured. If anyone can replace our beloved comrade, it is this foul creature. Because he can fucking shred.”

Little else is known about this being, other than that he has a skin condition where his face and feet are covered in painful pustules that can only be soothed by the application of savage metal, spoiled elephant semen or oral sex. Pustulus is also rumored to be half-deaf, which leads him to yell at everyone, which he does often, because he is convinced everyone in the band is ignoring him when actually he just can’t hear what they are saying. It is not known whether he crashed his Scumship into Antarctica or wandered up from the depths of Gwar‘s Antarctic fortress – all that is known is that he is here, now, and is ready to ROCK.

But Gwar fans wont have to wait until the tour to witness the ax-mastery of Pustulus.

Make sure to visit The A.V. Club tomorrow to see Pustulus as he shreds for the first time with his Scumdog Brothers in GWAR on a very special song that no other band would play, because it is so fucking hard. Unless of course you are GWAR.