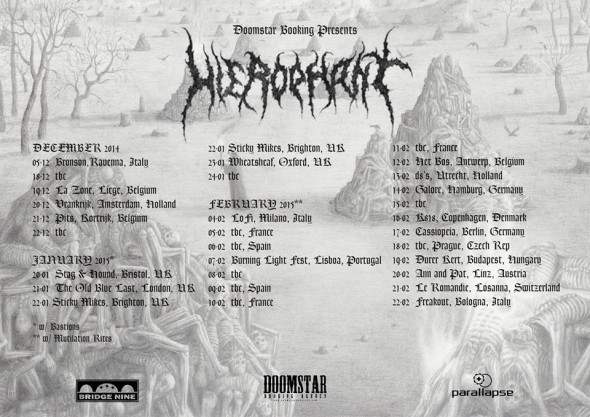 Italy’s Hierophant will be touring the greater part of Europe throughout December, January and February in support of their forthcoming new album, Peste, which will be available 11/25/14 from Bridge Nine. The band recently premiered a new track from the album, “Inganno”, on CVLTNation.com.

Peste is the follow-up to 2013’s acclaimed Great Mother : Holy Monster LP which was called “a searing brand of no-holds-barred dark hardcore” by Big Cheese Magazine. It was hard to fathom Italy’s Hierophant harnessing the potential to create a record heavier and more malicious than its predecessor, an already pummeling whiplash of American D-beat-inflected metallic hardcore. Lo and behold: Peste manages just that as a superior, succinctly crushing assault, its tendencies largely erring on the side of European death metal. Hierophant spell out the desolation and desperation leveled by a war amid the id, ego and super-ego, all torturous, violent imagery and morbid, damning assertions that make it a pleasantly grim nightmare to suffer through.

Hierophant‘s Peste is available for pre-order now via B9Store.com, and pre-orders will include a limited edition 7″ that features the track “Inganno” as well as a cover of Nirvana’s “Negative Creep”.