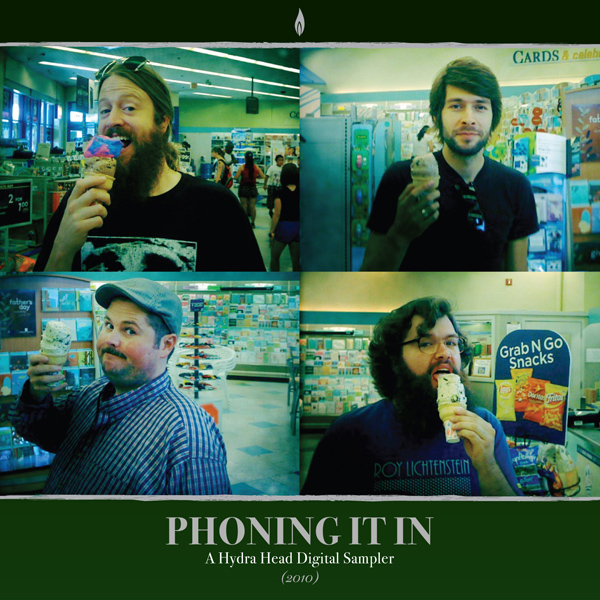 Hydra Head Records just dropped their latest sampler, Phoning It In, for free download via their Website. Phoning It In is an eclectic mix of some of the best acts Hydra Head has to offer. For those diggin’ on the heavier/up-tempo end of the spectrum, Daughters, Knut, and Cave In, have got some gems for you.

Knut’s offering “Calamity” from their recently released full-length Wonder, is personal fav. It’s been a good 8-9 years since I listened to Knut on the reg, and I must admit I am pleasantly surprised. The band is hitting a new stride after 16 years in the music game. “Calamity,” carries on the torch of such math-metal acts as Botch with new school production techniques that have captured the band sounding larger and tighter than ever. The track is filled with odd-timing guitar signatures and fresh pauses will no doubt raise some eyebrows. These Swiss rockers haven’t abandoned their sludgy roots, but are clearly branching into new directions with Wonder.

Daughters offer “The First Super,” in what is a bittersweet addition to Phoning It In, as the band has announced they are calling it a day with the release of their latest self-titled album. None-the-less, “The First Super,” is powerhouse track. Melding a disco-beat drum attack with a musical composition that is deserving of its own archeological record, “The First Super,” will have you revisiting for future listens. And as the band has announced they will not be doing a final tour for their last record, revisiting their catalog is all we can do. Bummer.

If ambiance and spacey tunes are more your things, Hydra Head has you covered. Opening track “Cloaking,” by Oxbow + Phillippe Thiphaine, is a spaced-out odyssey of prose vocals sitting upon the wide open drum and guitar works that almost bleed into modern Noise genres. Then, Pyramids With Nadja take us on a 15-minute journey into a spacey ambiance of soft vocal structure and subtle, delayed guitar work in “Another War.”

If your music tastes do not stretch into the eclectic spectrum, then chances are you are not going to enjoy all 22 tracks offered in Phoning It In. But even those niche listeners who hang out in their own musical neighborhood most of the year, will find several enjoyable listens. And who knows, some of you musical homebodies might find a new friend or two.