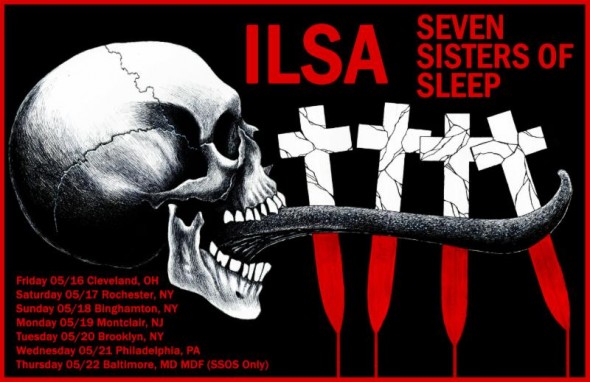 Following the 2013 split release between the two acts, A389 Recordings this week announces a short Northeastern US tour with a duo of priority acts from the label’s mighty roster; Washington DC’s ILSA and Southern California’s Seven Sisters Of Sleep.

With Seven Sisters Of Sleep traversing the continent to take part in this year’s installment of the Maryland Deathfest in Baltimore in May, their brethren in ILSA will converge with the band for a short but brutalizing run of dates, beginning May 16th in Cleveland and tearing through Rochester, Binghamton, Montclair, Brooklyn and Philadelphia together before SSOS splits off to invade MDF.

This tour will be the first new set of dates for Seven Sisters Of Sleep since their massive run of the country last year alongside labelmates, Full Of Hell, in support of their second LP, Opium Morals, released via A389 a year ago. With over thirty-three minutes of pure auditory authority, the album embodies the band’s murky blend of Disembodied, Grief, Harvest, Noothgrush, Unruh, Eyehategod and Xibalba into the most corrosive, debauchery-ridden and ethics-free sludge to date. The band will record their third LP for A389 upon returning home from the tour, the album to see release by the end of 2014.

The Spring tour also marks the first run of ILSA shows since mid-last year preceding an alteration to the band’s lineup. Aurally merging filthy, downtuned hardcore with mid-paced deathcrust, and visually meshing their deep-rooted fascination with the occult, violence and all forms of debauchery, ILSA has previously released several notable split releases and three full-length LPs, the latest, Intoxications, was released by A389 in 2012, who will also release their upcoming fourth full-length later this year.

Stream Seven Sisters Of Sleep‘s entire Opium Morals record, ILSA‘s Intoxications LP, and the split 7″ between both acts below.