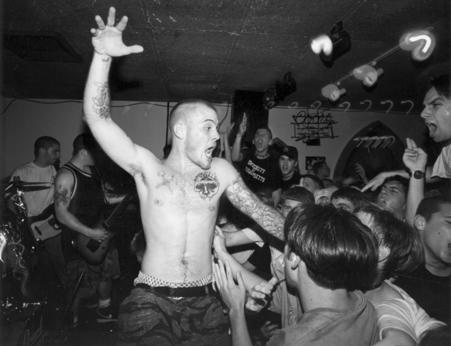 As the early 1990s lineup of groundbreaking metal/hardcore innovators, Integrity, prepares to reunite on stage for the first time in over two decades as the main headliners of the massive A389 X Bash in Baltimore this week, today the first new hymn from this iconic collective in just as long is now playing.

“7th Revelation: Beyond The Realm Of The VVitch” is a contemptible, ominous movement, one which recalls the brooding, religious overtones and occult persuasion which set this lineup of the Integrity clan apart from countless legions of bands preaching of veganism, straightedge lifestyles and supporting the hardcore scene in the early-mid ’90s. The first track to be recorded by the same lineup that brought forth the mega classic Systems Overload LP two decades ago — vocalist Dwid Hellion, guitarists Chris Smith and Aaron Melnick, bassist Leon Melnick and drummer Mark Konopka — now brings their slow, searing scorn forth with the more than three-and-a-half minute mid-paced song “7th Revelation: Beyond The Realm Of The VVitch,” boiling with the echoing, melodic leads and massive solos and trademark divebomb guitar tactics one would have expected to hear from these five souls in the mid-1990s. The track was recorded by current Integrity guitarist Robert Orr and mastered at Audiosiege.

Following their recent induction of Integrity‘s Systems Overload into their Hall Of Fame series, today Decibel Magazine brings an exclusive transmission of “7th Revelation: Beyond The Realm Of The VVitch”.

The Systems Overload HOF feature can be found in Decibel’s January 2014 issue.

In just four days, this lineup of Integrity will headline the A389 X Bash in Baltimore, Maryland, celebrating ten years of the label’s existence. With three days of brutalizing performances confirmed from Thursday the 16th through Saturday the 18th, Integrity‘s set will close down the entire fiasco, with support from Empire Of Rats, Homewrecker, Pick Your Side, Power Trip, Noisem, Weekend Nachos, Bloodlet and All Out War on that one show alone. The 7th Revelation: Beyond The Realm Of The VVitch 7″ will be unveiled early at the Bash, ahead of its official street date of February 7th.