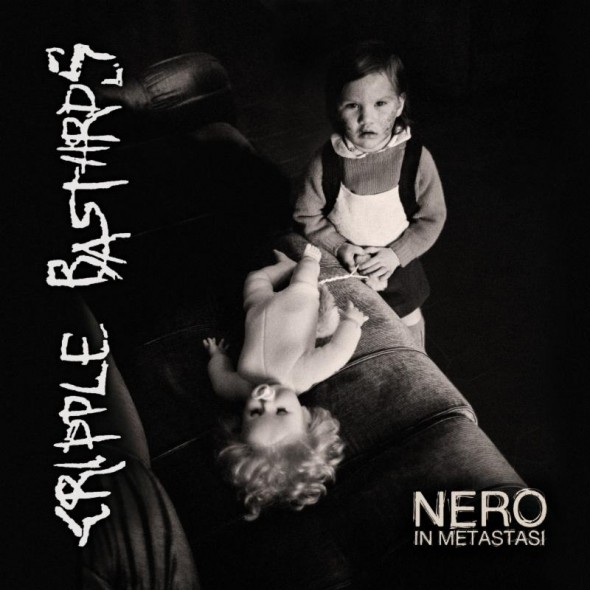 Having mauled the planet for over 25 years through an enormous arsenal of releases and widespread touring, Northwestern Italy’s unstoppable hardcore/grind masters, Cripple Bastards, begin their next full-on sonic attack now, as Relapse Records prepares to dispatch the band’s new album in early 2014.

Two and-a-half decades after their conception, Cripple Bastards reign as Italy’s most hostile and aggressive musical unit in existence, and are ready to prove it all over again with their newly completed debut LP for Relapse, the monstrous Nero In Metastasi. Packing some of their most dense and metallic destruction into eighteen new tracks harnessed under the thirty-seven minute mark, the album was recorded at the infamous Studio Fredman in Gothenburg, Sweden with producer Fredrik Nordström (Arch Enemy, At The Gates, Dark Tranquillity). While retaining the riotous old-school hatecore attributes they’ve carried forth since formation, yet elevating their delivery to put them on par with the most cutting-edge bands in the grindcore genre, Nero In Metastasi is the next major movement in Cripple Bastards‘ steadfast campaign of extreme auditory revolution.

A video teaser for Nero In Metastasihas been leaked below. Pre-orders are available at Relapse.

Nero In Metastasi will see release on CD, LP and digital formats via Relapse in North America on February 18th, preceded by a February 14th street date in Germany/Benelux, and February 17th in the UK. Precursory warning shots from the album will be firing into the population as a New Year of degradation ensues, among widespread Cripple Bastards tour actions, including the band’s return to the US on a full tour surrounding their performance at Maryland Deathfest 2014 and more.

Focusing on human annihilation and existential decay and taking the Napalm Death/Extreme Noise Terror foundation onward with brutalizing breakdowns, guttural vocal overthrows, blazing hardcore attacks and spastic dementia ascendant to that of Phobia, Birdflesh, Magrudergrind, Assück and many others, Cripple Bastards continues to terrorize the planet with their grind/hardcore ferocity since their 1988 formation, with literally dozens of EPs, LP’s, demos, split releases and compilation contributions under the banners of Deep Six, Deathvomit, Selfmadegod, Rhetoric, Feto, HG Fact, Obscene and countless others, among non-stop DIY/demo releases lying in their wake.

Cripple Bastards has proven equally as effective on the road, brutalizing countless countries on all of the generally habitable continents on the planet since 1992, the current lineup alone having played more than three hundred shows including three full-length tours. 2010 saw the band sign Relapse Records, who in 2012 released Senza Impronte, a 7″ EP bearing fifteen new tracks showcasing the band’s constant sense of evolution in their sound. The 2008-2012 touring schedule featured insane performances at Neurotic Deathfest, Brutal Assault, Obscene Extreme, Maryland Death Fest and a full headlining Brazilian tour.