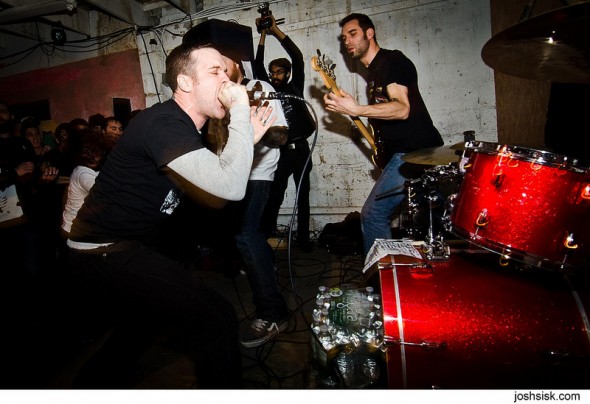 Recently reunited hardcore faction Left For Dead, having last year played their first show in many years, has not only confirmed more upcoming live appearances, but will also be releasing new material for the first time in nearly two decades.

In their brief but brutal two year existence, Hamilton, Ontario-based Left For Dead would prove to bear one of the most aptly-chosen monikers ever, the hatred and energy of their live shows and string of iconic ‘90s punk/hardcore releases still to this day considered legendarily heavy in some circles. Raging with unrest and revenge upon political and governmental bodies as well as meaningless and apathetic members of society in general, the band’s unhinged, blasting anthems infected the scene through split releases with Chokehold, Acrid and Ochre, eventually contained on the Splitting Heads discography No Idea Records released in 1998 following the band’s demise the previous year. Members of the band would form countless bands following LFD, most notably Haymaker, The Swarm, the groundbreaking Cursed, and the still-active outfits Burning Love and Pick Your Side.

In January 2012, Left For Dead played the A389 Recordings Bash in Baltimore surrounded by two hometown shows in Canada, their first live actions in over seventeen years. In conjunction with the reunion, A389 released Devoid of Everything, an all-inclusive discography of all LFD material, cut from the original 1/4″ multi-track reels and remixed at Developing Nations by Kevin Bernsten and mastered by James Plotkin. As to their philosophy, the only liner notes of the release pretty much sum it up: “Somehow, it’s been 17 years. Some of us are dead, some of us are lost, some of us still fight it out. Looking back, the rash and sleepless fog of paranoia and cynicism that we spat at our world through back then only gets more and more justified in hindsight. No regrets, no apologies. We are surrounded by liars, and we were right to be so hateful.”

Now in 2013, Left For Dead confirms that they’ll be performing at this year’s Chaos In Tejas twice — first alongside Integrity on Saturday, June 1st, then with Infest the following day, Sunday, June 2nd — followed by a spot on this year’s RRROOOAAARRR Fest in Montreal this August. They will also release the first new material since the mid-90s this year through a limited edition “subscription series” of four 7” releases sold through A389 beginning later this Summer. Each of the four 7” releases will be limited to 400 copies, the pressing quantity chosen in tribute to local hardcore house 400 Upper Sherman, a long-defunct pivotal local venue for D.I.Y. bands during the formative years preceding LFD’s original rampage.

The first new song from the pending first 7” in this series has been released via the track “1946” which can be previewed below.

Stream the entire Left For Dead Devoid of Everything discography via A389 below.