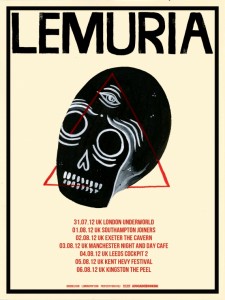 Lemuria is excited to announce their triumphant return to the United Kingdom from July 31st through August 6th!

Bassist Max Gregor commented, “Last summer, we set about a full UK/European tour with our friends Cheap Girls which turned out to be an amazing tour. Unfortunately, we were forced to cancel our London show due to the 2011 England Riots. Additionally, we were unable to perform at the Hevy Fest music festival/in the Kent region due to other circumstances. We are using this tour as an opportunity to make that up to our friends in London and Kent as well as a few select other towns across the UK.” Lemuria will be playing shows in London, Southampton, Exeter, Manchester, Leeds, Kent, and Kingston – please check out the full routing below.

Lemuria has spent the last year going strong on their Bridge Nine Records debut album, Pebble, which hit stores in January of 2011. Over the course of the year, Lemuria toured all over the world, including the US, Canada, Europe, the UK, and even Russia. Most recently, Lemuria released a 7inch for Record Store Day called Varoom Allure, and our friends at Banquet Records in Kingston will be carrying the 7inch. You can check out both tracks from the 7inch online: “Cannonballs to Hurt” on RCRD LBL and “Varoom Allure” on Facebook. For those of you not in the UK, you can pick up copies of the 7inch in the B9 Store.