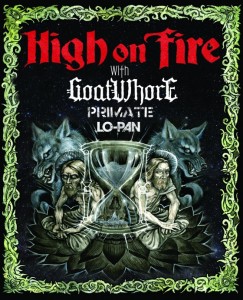 Ohio road burners, Lo-Pan, are readying for their next round of live assaults supporting heavy metal juggernauts High On Fire. The full North American takeover will commence on November 15 in Austin, Texas and is slated to run through December 22 in San Francisco, California. Additional support will come from Goatwhore as well as special guests Primate (featuring Mastodon’s Bill Kelliher and Kevin Sharp of Brutal Truth) and Corrosion of Conformity on select dates. Additionally, Lo-Pan will be picking up a few off dates in surrounding cities. Check the full itinerary below.

Lo-Pan continue spreading their rock and roll gristle in support of 2011’s Benny Grotto–produced Salvador full-length, released via Small Stone Recordings. Commended for its, “heaping helpings of thick guitars and rollicking bass and drums, topped off with a soaring lead vocal that combines the grace of Maynard Keenan and the grit of John Garcia,” by Rock Candy and called, “an utter triumph,” by The Number Of The Blog, the underground gem continues to find its place in the riff-adoring souls of hard rock and metal fans alike. “What makes Salvador distinct from the overloaded ocean of stoner rock albums,” noted Pro-Sphere is their take on the offering, “is the fact that the band’s formula of mixing strong riffs and melody succeeded and as a result we got 11 tracks in 46 minutes. These eleven pieces are extremely memorable, masterfully structured and well planned. With a thin line between stoner and mainstream rocking on moments, Lo-Pan is to be enjoyed by wide audience.” Sleezegrinder added: “Imagine if the mighty progressive metal band Tool dropped some of its artier affectations and decided to just blast it out. The men of Columbus, Ohio’s Lo-Pan dreamed the same dream, taking that band’s widescreen ambition and connecting it to unpretentious ‘70s hard rock and boogie on Salvador.” While The Obelisk writes: “If you’ve ever enjoyed riff rock, or whatever variation on the style you want to use, and you miss out on Salvador, you’ve really lost…Lo-Pan could easily stand as one of the most important bands of their generation in the genre.”