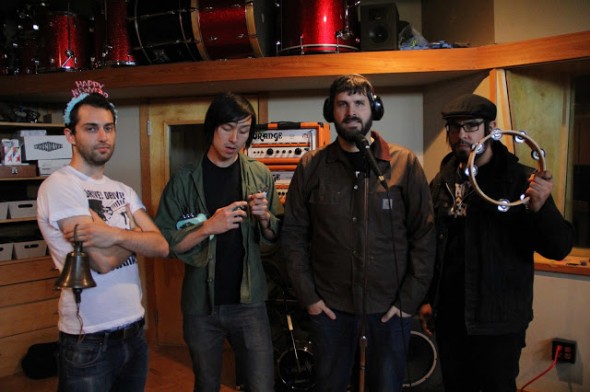 Brooklyn’s Meek Is Murder have completed work on their second full-length, Everything Is Awesome Nothing Matters. The album is set for an October 22nd vinyl release on Threshold of Pain Records and a digital release via the band.

For Everything Is Awesome Nothing Matters, Meek Is Murder employed the same one-two punch of a production team that crafted their 2011 full-length debut, Algorithms: producer and Converge guitarist Kurt Ballou (High On Fire, Nails) and mastering ace Alan Douches (Mastodon, Dillinger Escape Plan). A video from the recording sessions of Everything Is Awesome Nothing Matters, showing Meek Is Murder in action at Kurt Ballou’s Godcity Studio, is now streaming below.

With the first 8 songs blazing by in 7 minutes, Everything Is Awesome Nothing Matters sees Meek Is Murder channel Botch‘s gut-spilling noise-core and The Locust‘s hyperactive tech, and kick the whole shebang into steamrolling, punk rock overdrive. Furious, relentless and raw, EIANM is painfully honest and as epic as a Viking raid at dawn.

The inspiration for the album comes from what guitarist/vocalist Mike Keller calls “the most trying year of my life”, involving three deaths in his family, the end of a four-year relationship, the loss of all his possessions in a fire, temporary homelessness, illness, and a critically injured dog. Says Keller: “In a year like that, the temptation is there to become despondent and angry with the world. But you do what you can to get through the day and in the end you become a stronger dude for it. The truth was always there but I was finally able to make some sense of it all. Life is a paradox: it is cruel and beautiful and any meaning comes from within. Embrace your insignificance and make what you want, just because you want to experience the journey of making it. Everything is awesome. Nothing matters.”

Keller, a former member of The Red Chord and N.A.M.E., is flanked by drummer Frank Godla and bassist Sam Brodsky. Godla is also known as co-owner of preeminent metal site, MetalInjection. Since the release of Algorithms in 2011 (a co-release on MetalSucks and Granite House Records), the trio has toured the US with Fuck The Facts, Tiger Flowers, Hivesmasher, East of the Wall, and more, and has warmed up New York stages for Converge, RETOX, and Loma Prieta. The band also found time to write, record, and self-release a sci-fi concept EP, Into the Sun Where It Falls Off the Sky, produced by Jesse Korman of The Number Twelve Looks Like You.

Decibel Magazine has referred to Meek Is Murder as “the best mathcore to come along since that genre’s big hitters – Botch, Coalesce, Converge – dominated the late 90s.” Exclaim Magazine has posited, “[Meek Is Murder] takes the intense fisticuffs of Lords, smashes it against Pig Destroyer’s rabid proficiency and still comes across like an exorcism…”