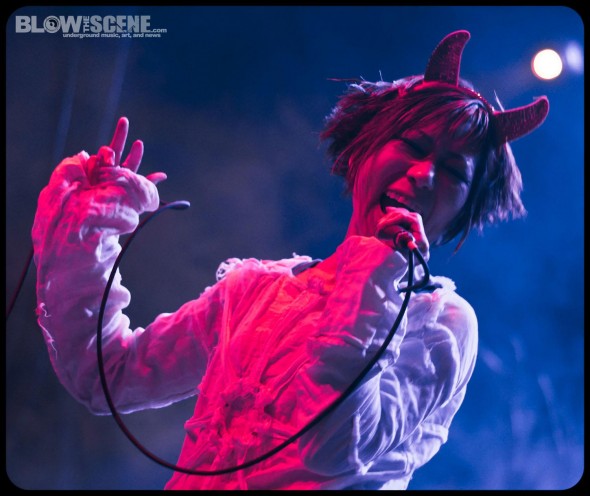 Japan’s speediest purveyors of experimental but melodic grindcore, Melt Banana are celebrating the release their 10th album, fetch with the extensive 2 do what 2 fetch North American tour that starts October 16 in Vancouver and ends November 16 in Oakland. All songs on the new album were composed by Melt-Banana and primarily recorded and mixed at Studio Ghost, Tokyo, Japan (supplemented with field recordings. fetch is being released by A-Zap Records, distributed by Revolver USA October 1.)

fetch scrapes glam shimmers off punk’s outermost fringes and forges them into a rather intensely technical Deanscape packed with fantastical hybrids. Agata’s guitar riffs, seemingly composed in tandem with skipping CD players, are more bad-ass than ever, bright and fractured like the soundtrack for a CC-Hennix-scored biker flick. The album is juiced with electronics and post-rock production, tempering what could easily be a tiresome and predictable frenzy, yielding unexpected associations: Kate Bush climaxing on Walter White’s blue meth; demos of late-period Wire playing metal run through Wasp synthesizers and Autotune; unripe wild lychees keeping time on an Angkor Watt tin roof during a monsoon.

From the whip-like crack of Yako’s signature staccato vocals and impossible to memorize lyrics to the relentless overdrive tempo of their one of a kind prog-core, Melt-Banana have long resided in a cybertopia of their own devising where the limits of technology and human capability are old-world concerns as quaint and cumbersome as bartering with a blacksmith. The demos for fetch, their first studio album since the severely fried pop-punk of 1997’s Bambi’s Dilemma, were completed in March 2011, but the Fukushima earthquake changed everything, including their ability to concentrate on recording. Which stopped completely. Once they felt ready to return to their music, they decided to approach the songs on a sound-by-sound basis, choosing each tone with meticulous attention to detail, affirming their personal connections, being themselves naturally and openly.

They’ve been performing live as a duo since summer 2012, and will do the same for their “2 do what 2 fetch” tour in support of the album. After nearly 20 years of playing with a live rhythm section, their use of a PC, while opening possibilities for a variety of drum and synth voicings, does not signal a move away from the traditional live band sound, as heard, for example, via the future transmissions from downtown Noiseapolis on 2009’s Lite Live: Ver. 0.0. Yako and Agata say they need to feel real band sounds onstage as much as someone in the audience. This is a group that routinely excels at several kinds of impossible simultaneously, so of course any new challenge they come up with for themselves is sure to blow the doors off your Mini Cooper.