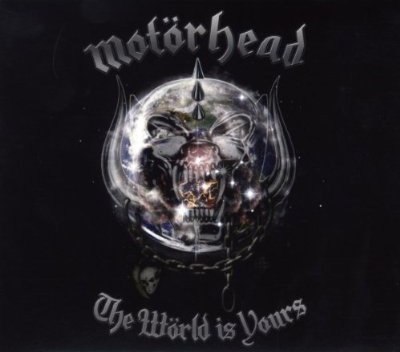 Motörhead have announced a North American headlining tour to kick off January 25 in Anaheim, CA, in support of their forthcoming album The Wörld Is Yours, which will be released in the US on February 8, 2011. The Wörld Is Yours is Motörhead‘s first release on their own label imprint Motörhead Music.

K Classic Rock Magazin exclusively features their latest album The Wörld Is Yours.

Motörhead, the legendary British Rock band formed in 1975 are this year celebrating their 35th anniversary and the 65th birthday of their iconic founding member Ian `Lemmy’ Kilmister by releasing their 20th studio album titled The World is Yours. The supporting magazine is the official companion to the album featuring exclusive interviews with the band and charts the history of one of the world’s most iconic rock bands whilst also providing the definitive liner notes on the recording of their new masterpiece.

Which is why Motörhead have chosen now, in what might be some of the most tense times in recent global history, to release a hell-raising, rebel-rousing rock’n’roll statement known as THE WÖRLD IS YOURS (December 10th in Germany, Dec 13th in the UK, Dec 14th in the rest of Europe – followed by releases in North America, Japan and Australia in January)

Written and performed by Lemmy Kilmister, Philip Campbell and Mikkey Dee in both Los Angeles, CA and Wales, with production once again by Cameron Webb, THE WÖRLD IS YOURS serves to remind everyone that you should never stop questioning or critiquing a society that would surely chew you up and spit you if given half a chance. And with 10 soul-scorching testaments to the unbridled power this world-famous trio continually maintain, THE WÖRLD IS YOURS delivers some of the finest, most important Motormusic yet.

On instant classics such as ‘Get Back In Line’, Kilmister thunders that ‘The way we are is not the way we used to be my friend’, and ‘We are trapped in luxury, starving on parole, no-one told us who to love, we have sold our souls’ , whilst on ‘Brotherhood Of Man’ Kilmister roars ‘You cannot hide the truth from me I know what’s in your heart, greed and jealousy each equal, all your days now dark’. And with the defiant, uproarious ‘Rock ‘n’ Roll Music’ , Kilmister and co remind everyone that ‘rock’n’roll music is the true religion’ and ‘rock’n’roll even gonna set you free, make the lame walk and the blind see’…

Recorded during the late spring of the year, the album’s creation was thrown into turmoil by the poor health and sad eventual passing of Philip Campbell‘s father; the situation dictated that Philip needed to be home during some of the scheduled recording time, so Motörhead hired a studio in Wales where Campbell was able to continue working on ideas and record tracks whilst first Mikkey and Lemmy, and then just Lemmy, laid down the rest of the album in LA. But being Motörhead nothing phased them, and with THE WÖRLD IS YOURS the band have triumphed over adversity to produce an absolute stormer in this, their 35th year as THE greatest, loudest and just plain goddam coolest band around!