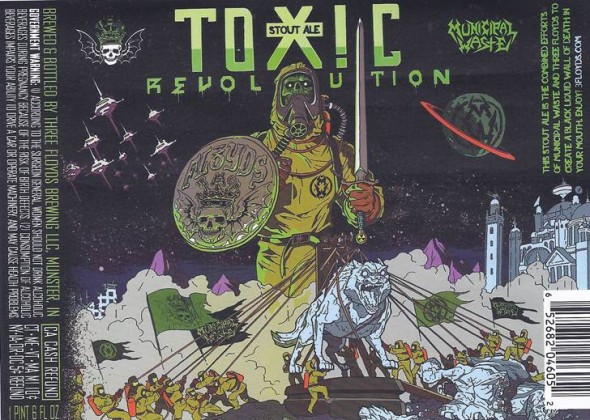 Grab your tattered flag and your full-face respirator for the celebration, ‘cuz it’s finally here: Municipal Waste’s Toxic Revolution Stout Ale, “a black liquid wall of death in your mouth.”

Thank science. Yes, science. Who else perfected the brewing arts of malting, mashing, boiling, fermentation, aging, and bottling? Next, give an extra-special thanks to Virginia’s speed metal punks Municipal Waste for being the inspirational muse to the liquid scientists at the artisanal craft brewery at Three Floyds.

Here’s what the guys in the Three Floyds lab coats have to say about their latest stupendous creation:

“Being able to have a beer made for the band is awesome,” shares Municipal Waste drummer Dave Witte, the band’s noted beer connoisseur. “Having a beer made for the band by Three Floyd’s is incredible and a dream come true. Not only are they world class beer makers, they are great people and understand the band. They invited me out to help brew and it was such a great time! After tasting the pilot batch and stages of the brew itself, I can say that this is going to be one hell of a beer. Three Floyd’s always outdoes themselves and this is no exception!”

Toxic Revolution will be released the week of March 11th via Three Floyds regular beer distribution channels & vendors in 22 ounce bottles. It can also be purchased on draught at the Three Floyds pub in Munster, Indiana (just down the road from Chicago).

Municipal Waste is on the upcoming Metal Alliance tour with Anthrax and Exodus, which launches on March 22nd in Anaheim, California. Check out tour dates & advanced ticket purchase links on the band’s Facebook page.