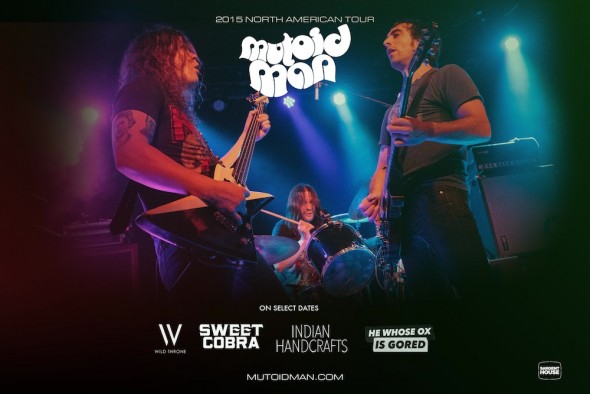 Mutoid Man is excited to announce a headline tour in support of its newly released debut full-length, Bleeder (Sargent House). The band recently completed a string of east coast dates supporting Dillinger Escape Plan, and is now gearing up to headline these new shows with support from Sweet Cobra, Wild Throne, Indian Handcrafts and more, with additional stops scheduled at Wrecking Ball (Atlanta) and the Gwar-B-Que (Richmond). Check out Mutoid Man‘s detailed tour schedule below.

Mutoid Man boasts and impressive lineup of Steve Brodsky (Cave In) on guitar and vocals, Ben Koller (Converge, All Pigs Must Die) on drums and Nick Cageao on bass, and has quickly established itself as one of the dominant new power trios in the world of heavy music. The band was initially meant to be an exercise in flexing the creative chops outside of the members’ other projects, but if their debut EP Helium Head (2013) proved that this musical diversion was serious business, Bleeder (2015) confirms that Mutoid Man are an imposing force regardless of their pedigree.

Bleeder is no self-indulgent sonic experiment, no tepid throwaway-track recycling project, no musical 180° into cringe-worthy territory. Instead, Mutoid Man offers up the best of Brodsky and Koller’s respective worlds. Brodsky distills the melodicism and metallurgy of Cave In into a concentrated elixir of frantic fretboard work, big riffs, and undeniable vocal hooks. Koller continues to batter his drums with unmatched force and dexterity. With the recruitment of bassist Nick Cageao and his driving low-end growl, Mutoid Man quickly established themselves as one of the dominant new power trios in the world of heavy music.