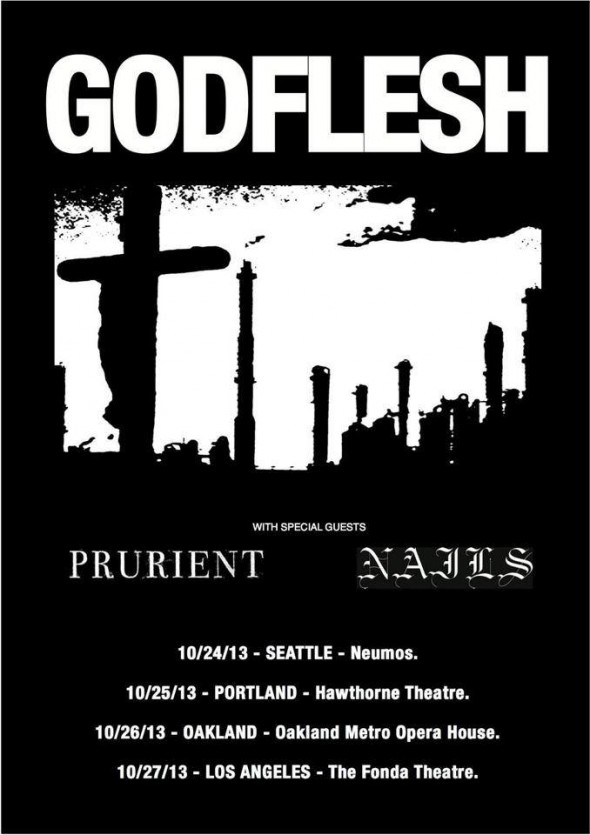 Nails will take their combative anthems back to the streets again in the coming months with several new tours and shows confirmed.

First up, the band will return to the annual This Is Hardcore in Philadelphia, the massive fest boasting four days of bands, with Nails performing alongside All Out War, Ringworm, Judge, World War 4 and countless others on Saturday, August 10th. Upon their return to California the band has locked down a pair of shows in Lancaster, California at the end of August.

Nails have also recently confirmed that they have been invited to support industrial/metal pioneers Godflesh on four West Coast dates of the UK legends’ American tour this Fall, the package also featuring experimentalist act Prurient. Nails will assault the crowds attending these special Godflesh appearances in Seattle, Portland, Oakland and Los Angeles as the tour makes its way south in late October.

Just two weeks later, the American tyrants will invade the UK for the first time in three years for a string of dates across the country on the Campaign For Elimination UK Tour. With shows locked down in Glasgow, Manchester, Bristol and London, Nails will be supplied with backup from Belgian nihilists Blind To Faith on the venture.

Nails demoralizing second LP, Abandon All Life, was released in March once again via Southern Lord. Recorded at Godcity with Kurt Ballou (Converge) and mastered by Brad Boatright (From Ashes Rise), Nails’ hardcore/grind approach infiltrated with more unhinged death metal ferocity than ever before on the album, as depicted in the torrent of international praise from fans and media outlets alike testifying to the album’s defeating supremacy.