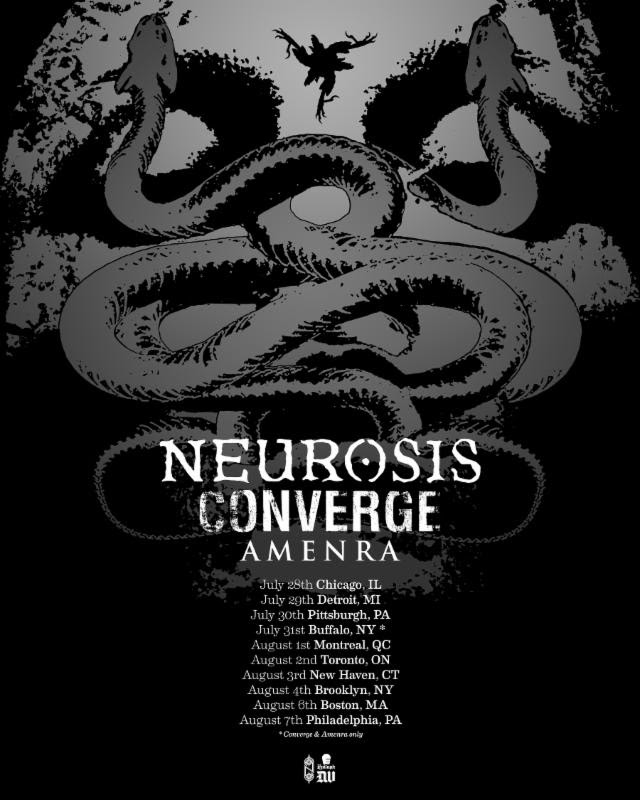 As the band continues to perform the works from their acclaimed eleventh studio album, Fires Within Fires, the upcoming tour will find Neurosis bringing their immersive live experience to the East Coast and Midwestern US, and Southeastern Canada. The tour will embark out of Chicago on July 28th, with shows in Detroit, Pittsburgh, Montreal, Toronto, New Haven, Brooklyn, Boston, and Philadelphia confirmed through August 7th. Iconic punk/metal experimenters Converge will supply direct support for Neurosis, and leading the charge will see Neurot labelmates Amenra making their long-awaited return to North American shores.

Neurosis is also confirmed to headline the Days Of Darkness festival in Baltimore, Maryland on October 28th and 29th, the two-day gala also including sets by Warning, Manilla Road, Elder, Gost, Unearthly Trance, Dälek, and Bongripper, and more. Additional Neurosis tour dates are to be expected.

Released in September, Neurosis‘ acclaimed Fires Within Fires is available now on CD, LP, cassette, and all digital platforms through the band’s own Neurot Recordings; see all bundles and options.

Surrounding the release of Fires Within Fires, Decibel Magazine published an entire issue dedicated to Neurosis, including multiple rare Hall Of Fame features as well as a full feature on the new album, a very brief section of the coverage praising, “Neurosis have redefined what heavy meant and what heavy could be, all while refusing to define themselves as anything more than conduits for the music they conjure like diviners. Now releasing their eleventh LP, Fires Within Fires, they’ve ascended from the trappings of youth to alter the landscape of heavy music like the violent shift of tectonic plates.” Rolling Stone published a massive feature on the band, including in part, “Outside of booking tours and scheduling press, the group has existed as a DIY operation for the better part of the last two decades, sort of like metal’s equivalent to Fugazi or Black Flag. Everything about Neurosis, from their extended drum etudes to the Pink Floyd-like visuals they hauled on the road with them for years, has been about bowing to their own artistic whims… Fires Within Fires, showcases the best aspects of the Neurosis experience: downtuned Sabbath-influenced riffs, pounding tribal drumming, fleeting moments of elegance and caustic vocals recounting personal apocalypses.”