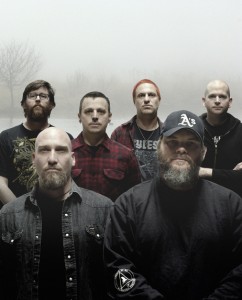 Neurosis have just dropped the official premiere stream of new album’s opening track, “We All Rage In Gold.”

This monster of an opening track to Neurosis‘ anticipated Honor Found In Decay opus, was premiered by Noisey, VICE magazine’s music channel. The six-and-a-half minute behemoth bears some of the most ethereal, organic resonance, as well as some of the most glacial, signature Neurosis riffs found on the new album. You can stream “We All Rage In Gold” in the Soundcloud player below.

The second track from Honor Found In Decay, “At The Well,” is being broadcast exclusively by NPR, and a detailed trailer created by Neurosis’ visual artist Josh Graham and edited by video architect Kenneth Thomas is flowing at Neurot Recordings‘ YouTube page.

The standard jewel case CD, limited edition Stoughton gatefold sleeve CD and digital download versions of Honor Found In Decay will be released on the band’s Neurot Recordings in time for Samhain, in Germany October 26th, throughout the rest of Europe October 29th, and in North America on October 30th. Neurosis’ previous label home Relapse Records will be handling the 2xLP vinyl edition of the album.

Stream Neurosis’ “We All Rage In Gold”

Directly following the unveiling of Honor Found In Decay, Neurosis will converge in their point of origin, Oakland, California, for a singular record release performance with support from Voivod and YOB. Two weeks later they’ll cross the Atlantic for two special UK performances, first at ATP’s Nightmare Before Christmas curated by Steve Albini’s band Shellac, followed by a concert in London with the mighty Godflesh. Additional live performances will continue to be announced in the months ahead.