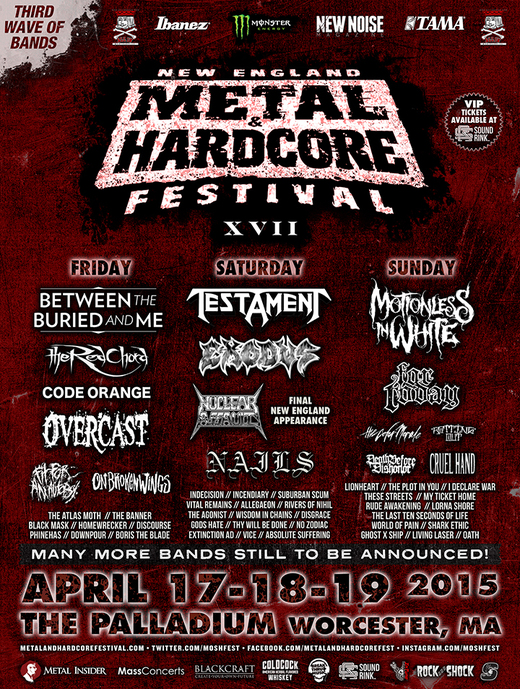 The seventeenth annual New England Metal and Hardcore Festival at The Palladium in Worcester, MA on April 17th, 18th, & 19th 2015 has announced a third wave of performing bands.

Friday’s lineup will see Fit For An Autopsy, Australia’s own, Boris The Blade and New England’s own, On Broken Wings. Saturday is a metal and hardcore onslaught with the addition of Vital Remains. The Plot In You, I Declare War, Lionheart, and These Streets will round out Sunday’s lineup.

As one of the longest running festivals of its kind in the US, the New England Metal & Hardcore Fest has helped jumpstart the careers of many acts including Lamb of God, Killswitch Engage, The Black Dahlia Murder and Behemoth. Since 1999, this multiple-day festival has been attracting dozens of bands and thousands of fans to the historic Worcester Palladium each year bringing metal and hardcore acts deservedly to the forefront of each genre.

Headliners already announced include: Testament, Between The Buried and Me, and Motionless In White.

Below is the full list of third wave band additions: