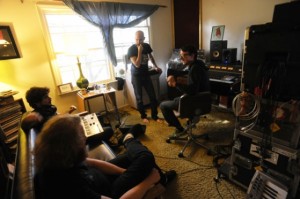 North Carolina’s MAKE recently entered the studio to begin recording tracks for a brand new EP and to lay the foundations for their sophomore album.

Off the back of a massively successful North American stint with UK sludgelords Dragged Into Sunlight and a prime placement at North Carolina’s Hopscotch Music Festival, MAKE checked into Track And Field Recording studios in Chapel Hill, NC, to record new material with engineer Nick Petersen (Horseback, Caltrop, Bon Iver).

Entitled ‘Axis’, the 3-track EP will act as stop-gap before the release of their next full-length and is the first new material the band have recorded since their critically-acclaimed debut album, Trephine, was released earlier this year via the band’s own Black Iron Records imprint and on vinyl through Devouter Records in the UK.

Says guitarist Scott Endres of the new EP: “It’s not meant to be a cohesive statement but rather ideas we had which didn’t necessarily fit in with the material we’ve been preparing for the next LP. I think the EP format is perfect for that sort of thing… allowing an artist to express different ideas which perhaps don’t fit in within the context of some other greater whole. I suppose we could have added a few more minutes of music to this and called it a short LP but this isn’t the statement we’re looking to make in following ‘Trephine’. We see this more as an appetizer or aperitif. Sonically though, it’s both more psychedelic, more metal and less metal than we’ve previously been. In that order.”

MAKE will be self-releasing the EP via their Bandcamp page on the 1st November. Their next full-length will drop in 2013. More news to come.

If you missed it, we recently caught up with the band for an exclusive interview.