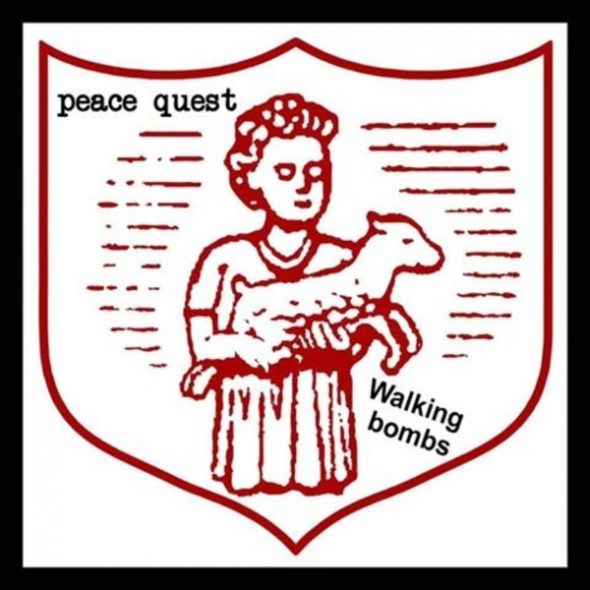 Walking Bombs, the solo/collaborative project of Kingston, NY based singer Morgan Ywain Evans, has linked up with Gridfailure (the one-man experimental powerhouse and brainchild of musician Dave Brenner) to deliver a pointed track taking aim at Donald Trump.

Earlier this year, Walking Bombs released a full-length debut Know Your Wild, a grunge/emo/acoustic hybrid featuring guests including Nate Hall of USX and Sean Paul Pillsworth of punk band Nightmares For A Week, but now a new and heavier EP called Peace Quest is imminent.

Evans teamed up with Surmiser guitarist and studio engineer Jay Anderson to craft this latest work which is a far departure from his folky-acoustic offerings. For the track “Demagogue,” Evans collaborated with electronic noise master, Gridfailure who provided the noisy outro goodness you’ll experience in the final moments of the stream debut below.

“I work most closely on this stuff with engineer and guitarist Jay Andersen of grunge/noise rock band Surmiser,” says Evans. “We’ve been on a roll and moved in a more sludge direction for some of this EP. The first song for public consumption is called “Demagogue”, a push back against the Donald Trump insanity, ” comments Evans.

“This was super fun since the song is so catchy and DIFFERENT than what I do, so it was awesome making another human’s works sound more fucked,” says Gridfailure’s Dave Brenner. “And… Trump. I now feel like I took part in helping keep this chump out.”

For this EP, Evans employed the capable hands of Tad Doyle (Tad, Brothers Of The Sonic Cloth) who mastered this puppy. The final culmination including bass licks by Laurie Safdie, is a quirky, yet catchy rock song with both male and female vocals jacked up high in the mix as one would expect from a folk effort. The song’s underbelly consists of naturally dry and driving rock riffs with lyrics taking clear aim at Trump before the song transmutates into a sludgy groove encased in the eerie noise offerings of Gridfailure.

Peace Quest will see independent release before the end of the year via Bandcamp with a follow up second full length in the works for 2017.

Preorders are live at Bandcamp: