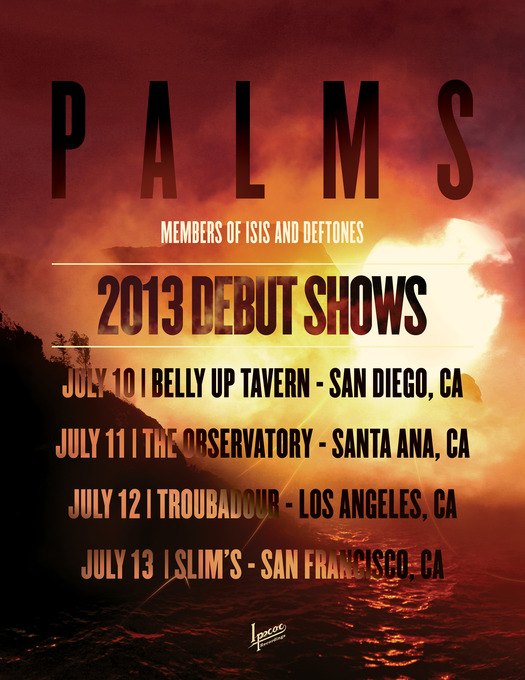 Palms, the Los-Angeles based band featuring members of ISIS and Chino Moreno of Deftones, premiere “Patagonia,” a song from the upcoming self-titled debut (June 25, Ipecac) via Pitchfork.

Palms came together following the demise of ISIS, with Jeff Caxide (bass), Aaron Harris, (drums) and Clifford Meyer (keyboards/guitar) electing to continue playing music together. “After a little time Jeff, Cliff, and I decided that it was insane that we all still lived here in Los Angeles and weren’t playing together,” Harris says. “It just sort of happened naturally, probably because we have been playing together for so long, and things started to come together. But we didn’t want to be instrumental: We wanted vocals. We just weren’t exactly sure who that would be at first.” The band, knowing that Chino Moreno (Deftones) had been a fan of ISIS, thought he would be a great fit and he agreed. “A chance to work with the guys from ISIS sounded like a lot of fun,” Moreno says, “I’ve always been into the atmospheric sounds they had created with that project and felt my sense of melody would meld well with theirs.”

Tickets for the shows are on-sale as follows: Los Angeles on May 2, Orange County (Santa Ana) and San Diego on May 3 and San Francisco on May 5.