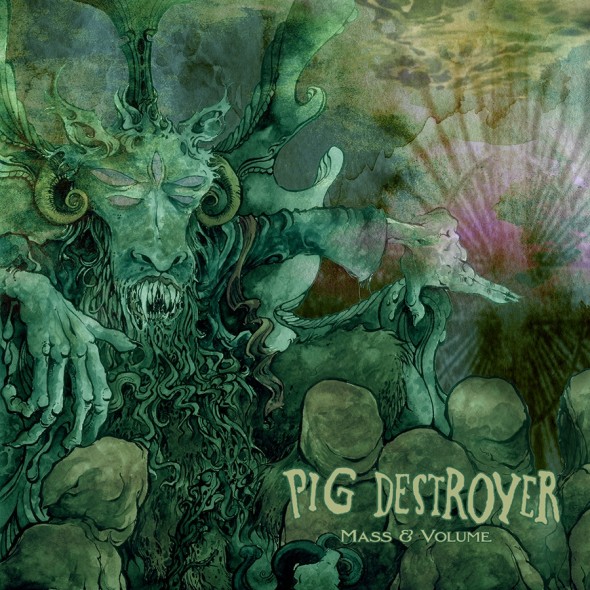 Grindcore masters Pig Destroyer have released a never before heard EP entitled Mass & Volume. This EP is dedicated to the memory of Pat Egan and to the loving family he left behind. The EP is a doom EP and the artwork was created by Arik Roper. The EP is available for purchase at http://patlapse.bandcamp.com/album/mass-volume. This is the only format that this EP is available in and all proceeds of this recording will be donated to the college fund of Pat Egan‘s daughter Katie.

The band spoke about Pat and the EP release:

“Pat Egan was a friend and a keystone member of the Relapse family for many of the years we have been involved with it. He devoted his life to supporting underground music and he immeasurably helped develop the bands he worked with. His untimely passing on February 18 2013 shocked the many people that his life and work had touched.”

This EP was written and recorded during the final day of the Phantom Limb sessions with unexpected extra studio time and resources. In the following years, with Natasha being released on its own and Brian no longer being in the band, our intentions of releasing Mass & Volume basically evaporated. However, looking back now, Mass & Volume serves as a great epilogue to that particular era of the band.

Less than 2 weeks ago Relapse Records released Patlapse in honor of the man who was so instrumental in the success of so many Relapse bands and records, the label has put together a 20 track compilation featuring a collection of his favorite songs and artists, including Mastodon, The Dillinger Escape Plan, Brian Posehn, Red Fang, Death, and many more, including a never-before-released track from Exhumed.

100% of proceeds from the compilation will go towards a college fund for his young daughter Katie. Relapse thanks each band for contributing each track and waiving their royalty fee to maximize the benefit for Pat’s beloved family. The compilation is available via Bandcamp for only $5 but friends and fans are welcome to donate as much as they want. Direct contributions may also be made via paypal to wellmissyoupat@relapse.com.

A memorial event for Pat has been scheduled for Tuesday March 5th from 6:00 PM – 9:00 PM EST at Idle Hands Bar in New York, NY. Everyone is invited to attend as we pay tribute to a dear friend, colleague & family man who left behind an amazing wife and a wonderful daughter. All proceeds from the event will go directly to his daughter Katie’s college fund. More information on the event can be found HERE.