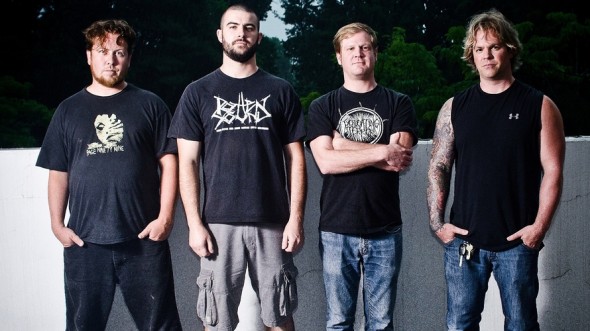 We just caught up with Pig Destroyer electronics guru Blake Harrison for an exclusive, in-depth interview as he touches on the making of the album and much more.

For those that cannot wait any longer to hear Book Burner, NPR is hosting an exclusive full stream of the entire album. Get a first listen to Book Burner courtesy of NPR.

In other Pig Destroyer news, the band recently shot a video for the track “The Diplomat”. The video was directed by Phil Mucci (High on Fire, Opeth, Korn) and will see its premiere next week.

Book Burner features 19 tracks with a return to the band’s raw, misanthropic sound. Book Burner will be available on multiple formats including CD, Deluxe 2xCD, LP, Deluxe 2xLP, Cassette and Digital. Pre-Orders for all of the editions are available via Relapse Records.

In support of Book Burner, Pig Destroyer will be making special appearances at various festivals and shows throughout the year, including the UK’s Damnation Festival, The Metal Sucks/Metal Injection CMJ Showcase, Decibel Magazine’s 100th Issue Anniversary Show and Maryland Deathfest 2013. A full list of dates is included below.