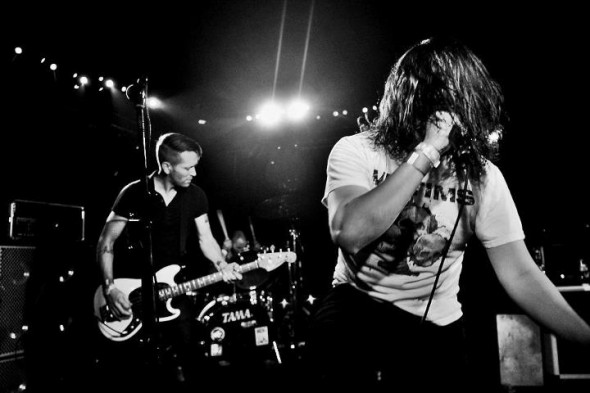 Last week, after playing an impromptu show with onetime tour mates Cancer Bats, Primitive Weapons performed at the prestigious CMJ Festival as part of the Pitchfork showcase alongside the likes of Car Bomb, Batillus, Pyrrhon and Theologian. Vocalist David Castillo commented as follows: “CMJ was a great time! Our last-minute show with Canadian homies Cancer Bats was a beer-soaked blast and the haunting sounds of Pitchfork’s Show No Mercy Showcase will stay with me for a long time.”

Primitive Weapons‘ debut full-length The Shadow Gallery was described by MetalSucks as “a gmarly blend of crushing stoner metal and metallic post-hardcore” and received a 9/10 rating from Outburn, who praised its “Good Hunting” and “Quitter’s Anthem” as “hands down, two of the best songs you will hear in 2012.” Recorded at Wild Arctic Studios with Deam Baltotunis (American Nightmare, Goes Cube, The Hold Steady), the album is currently available at Prosthetic Records.