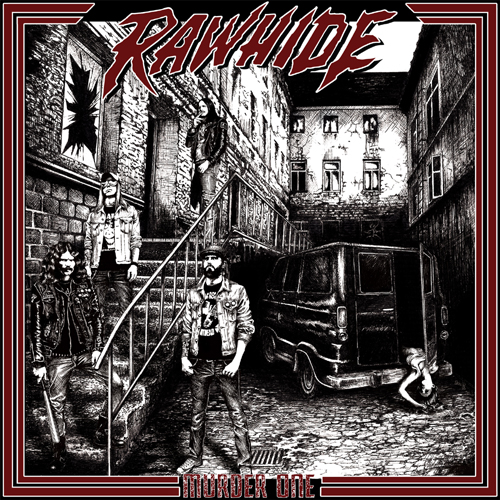 Spawned over a decade ago by guitarist/vocalist Robert (Bestial Mockery) and bassist Captain Twofinger, Rawhide tips its pints to the teachings of Motörhead, Turbonegro, Gluecifer and GG Allin. Following three self-financed demos, 2008’s Plenty Ain’t Enough compilation, and two 7″s — Built To Blow and Branded For Life, which Exclaim! fittingly baptized “a grinding assault of barreling punk rock ‘n’ roll injected with enough malicious metal to ensure there’s even more danger, intensity and cacophony than one would typically expect” –Rawhide is ready to release the proverbial hounds with the filth-ridden sounds of Murder One.

Comments the band in a collective belch: “God created this beautiful world in six days and it took us bastards only one record to destroy it all on our way to ruin.”

Recorded in 2012 at Sunlight Studios together with producer legend Tomas Skogsberg (Hellacopters, Backyard Babies, Entombed etc.), Murder One embraces the band’s adulation of classic punk, rock, sleaze and all things deviant with ten tracks of earnest, bar brawling bedlam made of blood, guts, beer and tainted ladies. Murder One will be released via PATAC Records digitally and in wax format in a limited run of 350 (100 red/250 black).

You can also sample the ruckus, with four tracks now streaming at the PATAC Records BandCamp.