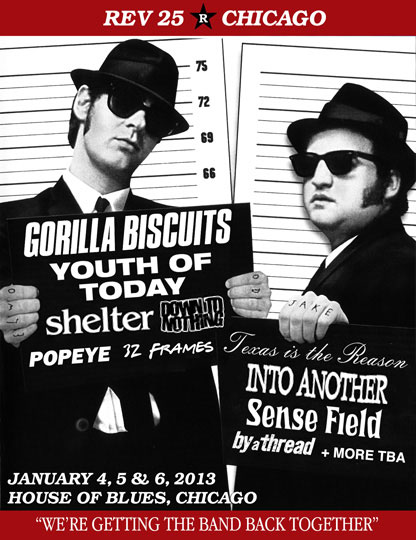 Revelation Records will finish up its 25th Anniversary celebration (“Rev25”) with a three day live event in Chicago this January. Titled Rev 25, the Chicago edition (which follows recent sold out editions in New York and Los Angeles) will go down from Jan 4th-6th at the House Of Blues (329 N. Dearborn). The event will feature performances by some of the labels most beloved bands, (including many who haven’t been on stage together in 10 or 15 years).

Alpha primates Gorilla Biscuits will be headlining the first two nights, supported by Youth Of Today, Shelter, Down To Nothing, and others. The final night will be headlined by fellow New Yorkers Texas Is The Reason, along with Into Another, Sense Field, and a special performance by Popeye from Farside. Ticket link and full line-up announced below

January 4, 2013
Gorilla Biscuits
Shelter
Down To Nothing
By A Thread
TBA

January 6, 2013
Texas Is The Reason
Into Another
Sense Field
Popeye (from Farside)

Founded in 1987 Revelation Records is an independent record label that holds a special place in the evolution of hardcore and post-hardcore music. In addition to releasing essential albums from the bands mentioned above, Revelation artists has included: Warzone, Sick of It All, Quicksand, Chain Of Strength, Judge, Bold, Ignite, No For An Answer, Inside Out, Shades Apart and many others.