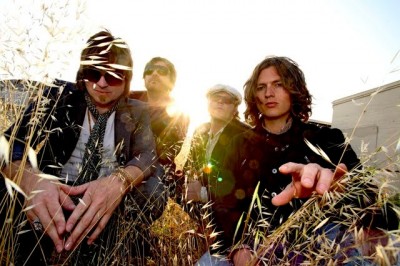 Californian blues-rockers Rival Sons‘ brand new music video for the track “All Over the Road” has premiered exclusively on vevo.

Rival Sons‘ once again teamed up with video director Greg Ephraim for the stylish new video, which is the band’s second video to premiere on Vevo following the release of Pressure and Time earlier this year, placing the band alongside numerous big-name artists.

Watch the “All Over the Road” video now by heading to Vevo.com, where the video is featured in vevo’s homepage carousel.

Viewers in territories where VEVO is not available can still watch the new video on YouTube below.

“Just like in the last video, there was no green screen used for this one. We actually did drive a Cadillac through outer space with a bunch of hot, naked chicks in the backseat. I haven’t seen a final edit yet because they’re trying to lower it to at least an ‘R’ rating. We’ll see if that actually happens.”

“All Over the Road” is taken from Rival Sons‘ new album, Pressure & Time, which is out now worldwide. Get the album on CD and limited edition audiophile vinyl in North America or in Europe.

See Rival Sons on tour at the following shows: